Imagine my delight when an e-mail arrived one evening via Ancestry.com asking if Ihad any information to help with a family tree.charming person who had contacted me – Anne – proved to be my previously unknown second cousin once removed and there followed an exchange of information from which we both benefited.

She sent me a delightful copy of her grandparents wedding photo with many names added. It was in 1914 and Anne’s grandfather was about to go off to war.

I had previously found a newspaper report on this wedding which I sent to her, and she tells me that her family still have the “handsome clock” mentioned.

She shared a fascinating letter giving details of her grandfather’s life as Head of Gardening Services at the Wingfield Morris hospital complex. He had previously worked at Sir Frederick Keble’s garden at Boars Hill and for Sir Arthur Evans, archaeologist, who donated part of his land (Youlbury) to the Scout movement for camping, two very wealthy and famous men.

Together we worked out that a hazy photo of a couple which she had, and also similar photos which I had, must be of her great grandfather, who was a farmer at Ufton and later Chieveley, John Webber, and his wife Emilie.was very satisfying for me as I had long been comparing likenesses with others in the family, but could not be sure.

In one of the photographs, a group were holding guns, as if they were off rabbiting.made me think of a funny diary entry by my father in 1933 in Chieveley when he was 26:

“Cousin Newton motored over at Dad’s invitation for some ferrettings. They started out just as I got back from the milk round. After they had been out about 15 minutes or so, a young man came for Dad and I ran up the lane to fetch him. Dad asked me to stop in his place while he went indoors, telling me that his gun was loaded.

Picking up the gun, I stood in what I imagined was the professional attitude, hoping very sincerely that the rabbits would all go to Cousin Newton’s side of the hedge.less than five minutes a rabbit suddenly came from a hole, and after hesitating a bit, ran right across the meadow in front of me.(Before it came out, I had decided that if a rabbit should come out my side, I had better have a shot at it, or else CN would think I was a fool or half-wit or both, or worse!)

I lifted the gun, sighted the rabbit, pulled the trigger and to my profound astonishment and relief, it rolled over and over and after two or three kicks lay still. This is the first time that I’ve used a gun or shot at a rabbit.Dad came out again I went off to light the fire in the sitting room.” 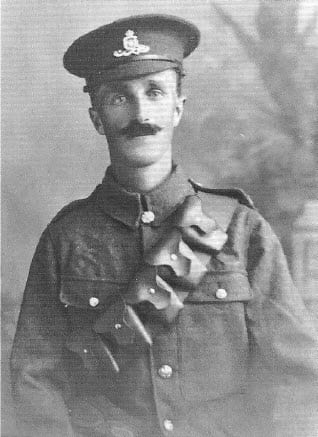 Anne also shared some beautiful photos of her grandfather William, who had been a “trooper in the cavalry”, Royal Horse Artillery, and had survived a gas attack. He wears the bandolier but without a lanyard, which I understand is odd.

Two of the photos of this man are of him recuperating at Moorgate hospital in January 1918 in his “hospital blues” (not reproduced in this article).is all we know of his military career and we wondered if any military experts on the RHA in the Berkshire FHS might help us here; any pointers would be gratefully received.