Woolhampton is a village and parish eight miles west of Reading and six miles east of Newbury. The A4 divides the parish, with most of the population the living on the northern side. The southern portion is crossed by the river Kennet and the Kennet and Avon Canal, on which stands Woolhampton lock. There are several lakes. The River Enborne forms part of the parish’s southern boundary.

The GWR also runs through the parish, although the station in Woolhampton is called Midgham station, supposedly because of confusion between Woolhampton and Wolverhampton.

Woolhampton is a rectory, now one of six churches in the benefice of Aldermaston and Woolhampton.

The church of St Peter stands on a hill to the north of the village. It was rebuilt in 1857. A 12th-century font is said to be buried under the floor.

St Mary’s Roman Catholic church was enumerated in the 1851 census. Now in Kiff Green Lane, it is attached to Douai Abbey and serves the Catholic parish of Woolhampton.

A Congregational chapel was built in 1768.

Woolhampton has Roman Catholic connections deriving from the inheritance of the estate by an Irish peer, the Earl of Fingal, in the eighteenth century. In the 1851 census a Catholic chapel was enumerated, headed by a parish priest, and housing dozens of schoolboys (boarding) from all over the UK and overseas; this may have been the second daily school noted in 1833. In 1903 the Benedictine Douai Abbey and School (a public school for boys) were established here, on being expelled from France. Douai Abbey school closed around 2000, and its land was given over to building 75 new dwellings. The Benedictine monastic community remains.

Today Woolhampton has a Church of England primary school, probably the successor to the village school noted in 1833 and enumerated in the 1851 census.

Woolhampton had several pubs, the first two of which were former coaching inns on the A4:

Woolhampton was part of a 2,000-acre estate, owned by the family of Viscount Falmouth. It was sold in 1856 to a London merchant, James Blyth. The estate was broken up at the beginning of the twentieth century. 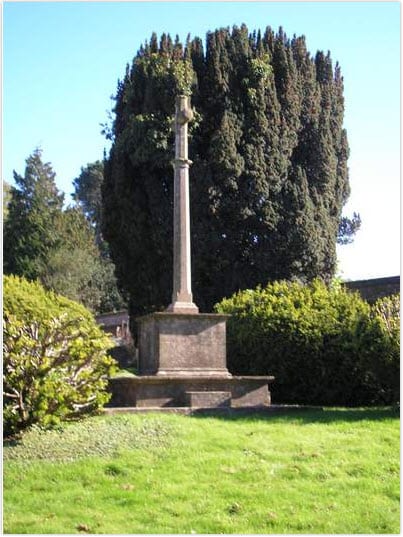 Standing in a corner of the churchyard of St Peter’s Church, Woolhampton Hill, Upper Woolhampton, the memorial commemorates those who died in both World Wars.