The town of Wokingham is situated in the Thames valley some 6 miles east of Reading, centred on grid reference SU812686 (Market Place) with access to east Reading and Bracknell via the A329 and to south Reading and London via the M4, and to central Reading and London Waterloo via railway from Wokingham station.

The name of Wokingham probably derives from the Woccingas, a Saxon tribe based around Woking, has recorded history from the 12th century, as the chief forest town of Windsor Forest. It still retains houses from the 15th century onwards in the central part of the town, and many of the present buildings were erected in the mid 19th century, several being donated by the Walter family of nearby Bearwood estate (original owners of The Times newspaper), and many others, including hall-houses, were re-fronted in the same period. The town centre has a Victorian character, typified by the town hall, opened in 1860. 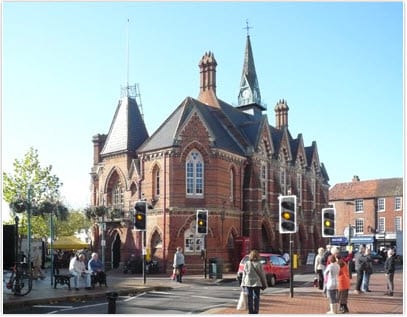 Wokingham Town remains a separate voting ward and retains its own mayor and a small staff based in the Town Hall, which contains an information centre for the surrounding area. The town has an area of 557 acres / 228 hectares / 0.9 sq mi and a 2001 population of 30,403 (data from Wikipedia). It was originally in the hundred of Sonning, and was the centre for the Poor Law Union of Wokingham.

Wokingham Borough Council, created from Wokingham District Council in 2007 and based in the old vicarage at Shute End at the western end of Broad Street, is the administrative headquarters of Wokingham Unitary Authority, itself formed in 1998 following the abolition of Berkshire County Council.

Wokingham Register Office was located in the Old School (one of the Walter buildings), across the road from Shute End, but this was sold in late 2011 and the office transferred into the Shute End building.

Wokingham library in Denmark Street (formerly Down Street) has a local studies section which holds census and newspaper films for the town and a variety of local books and monumental inscription information on fiche and on computer, with internet access. http://www.wokingham.gov.uk/leisure/libraries/our-libraries/wokingham-library/

The original parish church of All Saints, documented in the 12th century as part of Salisbury deanery (the parish was eventually transferred to the Diocese of Oxford in 1836, and the patronage of the church was transferred in 1846)), still stands with an extensive churchyard at the east of the town centre; a new parish was created in 1863 with a church dedicated to St Paul on the Reading Road, west of the town centre, with its own burial ground. A further parish was formed in 1871 based around the church of St Sebastian, which was consecrated in 1864, on Nine Mile Ride to the south of the town again with a burial ground. Additional places of worship include the Baptist Church in Milton Road (previously Nonesuch Lane) and the Methodist Church in Rose Street, which together provided the Free Church Burial Ground, close to St Pauls on the Reading Road.

The primary schools within the Borough are:

The secondary schools are:

Many of these schools have websites accessible via http://www.school-portal.co.uk/ or it may be easier just to google the school name; contact details for all of these can be found at:

A website with particular interest to family historians covers the people behind the names on Wokinghham’s War Memorials, and can be found at:

Saint Sebastian’s Memorial Hall on the Nine Mile Ride between Bracknell and Finchampstead at SU 832 656 contains two stained-glass memorial windows, this one commemorating deaths in World War I 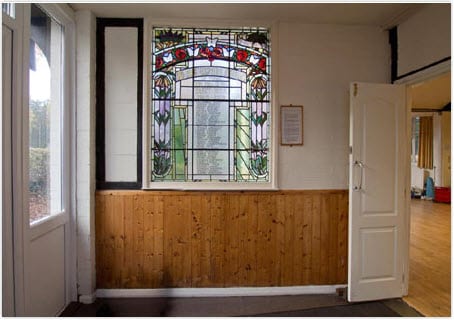 and another, commemorating deaths in World War II, together with other plaques covering the building of the hall and installation of the windows. 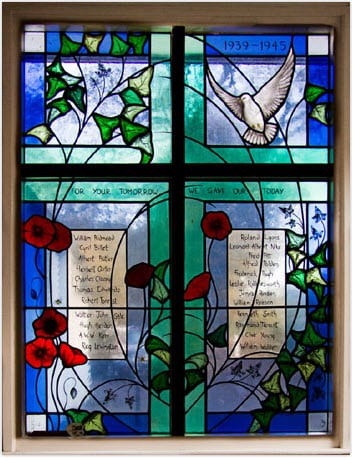 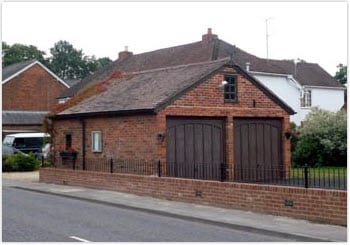 The small timber memorial on Forest Road, Wokingham, is built into the side of a private garage at grid reference SU 82870, the left-hand of the two frames shown.

In white hand-painted letters, it commemorates the men of Forest Road who died in World War 1.