The village and civil parish of Woolstone is, like several of the Berkshire downland parishes, a long strip of land. It is traversed by the Ridgeway at White Horse Hill, and by the Wilts & Berks canal, which opened in 1810 and closed in 1914. The White Horse lay within Woolstone until it was transferred to Uffington in 1776. Woolstone itself was a chapelry of Uffington until 1846, when it gained its own ecclesiastical parish status. The Victoria County History Berks (1924) treats Woolstone as part of Uffington. 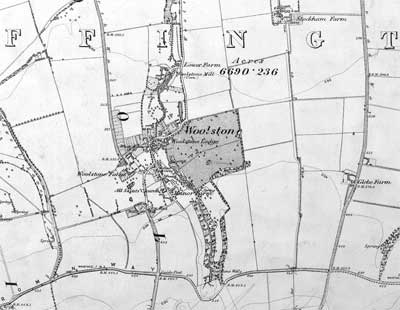 Woolstone transferred from Berkshire to Oxfordshire in 1974.

Woolstone is also the name of the two villages (Great and Little) from which Milton Keynes in Bucks was developed.

Woolstone’s parish registers were kept with those of Uffington until 1848.

Woolstone was a chapelry of Uffington parish, from which it separated in 1846. Woolstone lies within the rural deanery of the Vale of White Horse, formed in 1860, within the diocese of Oxford. Today the parish is part of a group of four administered from Uffington.

The church is All Saints, said to predate the Norman Conquest, and certainly dating from the twelfth century. It is built of clunch (chalk blocks). Below is a picture of clunch cottages in Woolstone at around 1900. 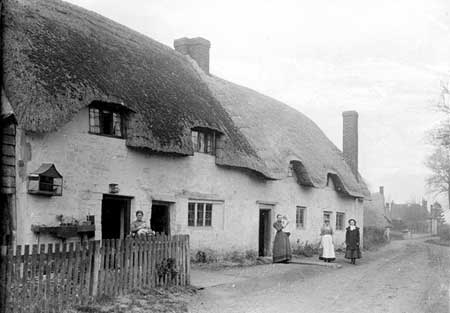 The White Horse Inn claims to date from the sixteenth century.

In 1798 the manor came into the hands of the Wroughton family, which in 1814 sold it to the Craven family.

In 1851 Woolstone had a boot and shoemaker employing seven men. The 1851 census also found a grocer, miller and a victualler.