South Moreton is a village and civil parish about three miles east of Didcot and four miles west of Wallingford. It lay in north Berkshire until the boundary changes of 1974 reallocated it to Oxfordshire.

The railway passes north of the village, separating it from North Moreton. Didcot is the nearest station. 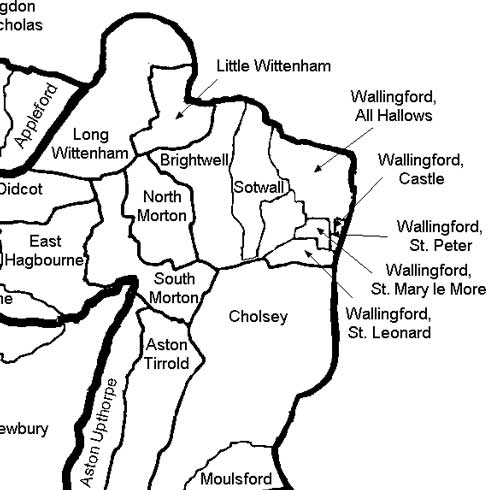 The living of South Moreton is a rectory in deanery of Wallingford, archdeacontry of Berkshire, diocese of Oxford (Salisbury prior to 1936). It was formerly in the gift of Magdalen Hall, Oxford. The parish is part of the Churn Benefice, along with the neighbouring parishes of North Moreton, Aston Tirrold, Aston Upthorpe, Blewbury, Hagbourne, and Upton.

The parish church of St John the Baptist, Saxon in origin, underwent radical restoration in 1849.

A Congregational chapel was licensed in 1672, and today there is a Baptist chapel with a burial ground, founded in 1832.

In 1856 the Rev William James, a former rector, bequeathed to the parish school £100.

Today there is a South Moreton Primary School.

The Anchor Inn and Crown Inn were enumerated in the 1851 census. The Crown survives today.

South Moreton’s Victorian history is recorded in a book written by the rector during the Edwardian period from memories stretching back to 1845, and now deposited in the Berkshire Record Office as D/P87/28/4 South Moreton Antiquities and Reminiscences.

Two mills which existed in the late seventeenth century later became papermills. The first burnt down in 1838, and the other reverted to corn-grinding.