The parish of Shaw-cum-Donnington is a combination of two townships, Shaw and Donnington, on the northern boundary of Newbury. The southern boundary of the parish is the river Lambourn, and the northern stops just short of the Fox and Hounds on the Oxford Road, and Fisher’s Farm on the B4009 to Hermitage. To the east, the parish includes Long Lane and Shaw Hill, and to the west reaches to Snelsmore Common.

The division between the two settlements was marked by the turnpike road from Winchester to Oxford, now the six-lane A34. The Didcot, Newbury and Southampton railway, which opened in 1882, ran through the north-eastern corner of the parish until its closure in the 1960s, but there was no station here.

The rectory of Shaw-cum-Donnington was in the diocese of Salisbury until 1404, when it was transferred to St Mary’s College, Winchester. In 1836 it transferred again, to the deanery of Newbury and the archdeaconry of Berkshire and the diocese of Oxford, to which it still belongs.

The original Saxon church of St Mary the Virgin was built around the year 1000, more than 500 years before Shaw House, which it adjoins. In 1840 the old Saxon building, believed to have been roofed with Roman tiles, was pulled down and rebuilt. The original font, memorial tablets, and bells were transferred to the new building.

There are not known to have been any nonconformist chapels in Shaw-cum-Donnington.

A parochial school was erected in 1843. This was the forerunner of today’s Shaw-cum-Donnington C of E Primary School. The BRO has papers relating to the school from 1874 onwards.

Shaw House became a school after the 1943 bombing of the council senior schools in the St John’s area of Newbury. From 1947 it took girls only as a secondary modern, becoming comprehensive in 1975 and co-educational in 1981. In 1999 Shaw House School merged with neighbouring Turnpike School to form Trinity School on the Shaw House site.

Both Shaw and Donnington are ancient villages appearing in the Domesday book as the manors of Essages and Deritone.

At Donnington a castle was built by Richard Abberbury/Adderbury, from whom it descended through the Chaucer, De la Pole, Brandon and Parker families. During the Civil War it was held for the king through a siege lasting eighteen months, during which time most of the village of Donnington was demolished. Sir John Boys surrendered the castle in April 1646, whereupon it too was demolished, save for the gatehouse, to prevent it being used again. Donnington Castle, as it stands today, is the only stone castle in Berkshire other than Windsor. It is freely open all year round and is managed by English Heritage. Pictured below is an eighteenth-century print of the castle. 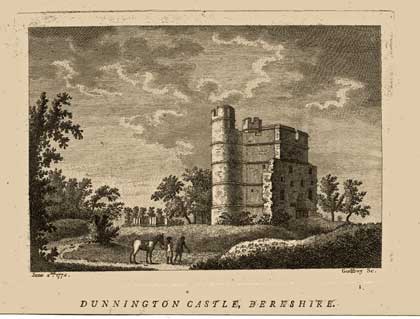 In a related but separate action the second battle of Newbury was fought in October 1644 across Shaw, Donnington and the neighbouring parishes of Speen, Newbury and Thatcham. The Parliamentary forces massively outnumbered the Royalists, whose defences held out against a poorly coordinated attack. Charles I and Cromwell were both present. As in the first battle of Newbury the previous year, neither side could claim victory.

Shaw House was built in 1581 by the Newbury clothier Thomas Dolman, and is an almost perfect example of its period. The house featured prominently during the second battle of Newbury, although some of the legends since accreted have been difficult to verify. Owned successively by the Duke of Chandos, the Andrews and the Farquhar families it became Shaw House School during the Second World War, and continued as such until 1982, when the Grade 1-listed  building was found to be structurally unsafe. The school was evacuated, and the house stood empty and deteriorating for years, while first Berkshire County Council and then Newbury District Council dithered over the mounting repair bill. Salvation came in the twenty-first century, and Shaw House is now open to the public after a £6 million restoration. It houses the local register office. Below are pictures of Shaw House 1) in the 1830s and 2) in 2009. 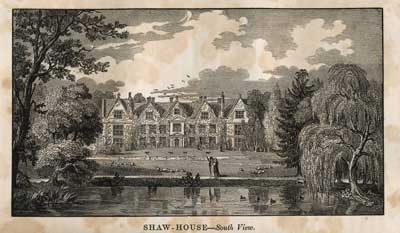 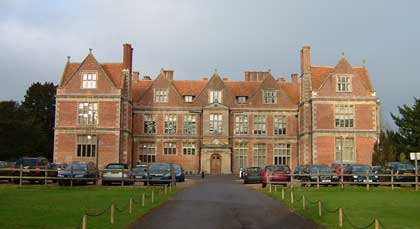 Donnington Hospital, called God’s House, was originally founded in 1392 by Richard Adderbury for a minister and “twelve poor brethren”. It was rebuilt in 1570, when its name was changed to Queen Elizabeth’s Hospital,  and rebuilt again after the siege of Donnington Castle.

Other major houses in the parish

Donnington Castle House was originally the residence of the constables of the castle. Destroyed after the siege, it was rebuilt from castle materials.

Donnington Priory was founded by Sir Richard Adderbury, and, like most of Donnington, had to be rebuilt after the general devastation of the village caused during the siege. It now houses a firm of surveyors and auctioneers.

Donnington Grove, built in the eighteenth century in the neo-Gothic style by James Pettit Andrews of Shaw House, was sold to Beau Brummell’s father. It is now a country club and golf course.