Some years ago, I inherited some very large and lovely photo albums, mostly places in Berkshire and Hampshire. The majority of them have been deposited for safe keeping and conservation in the respective County Record Offices, but I have copies, and am always intrigued by where they were taken. 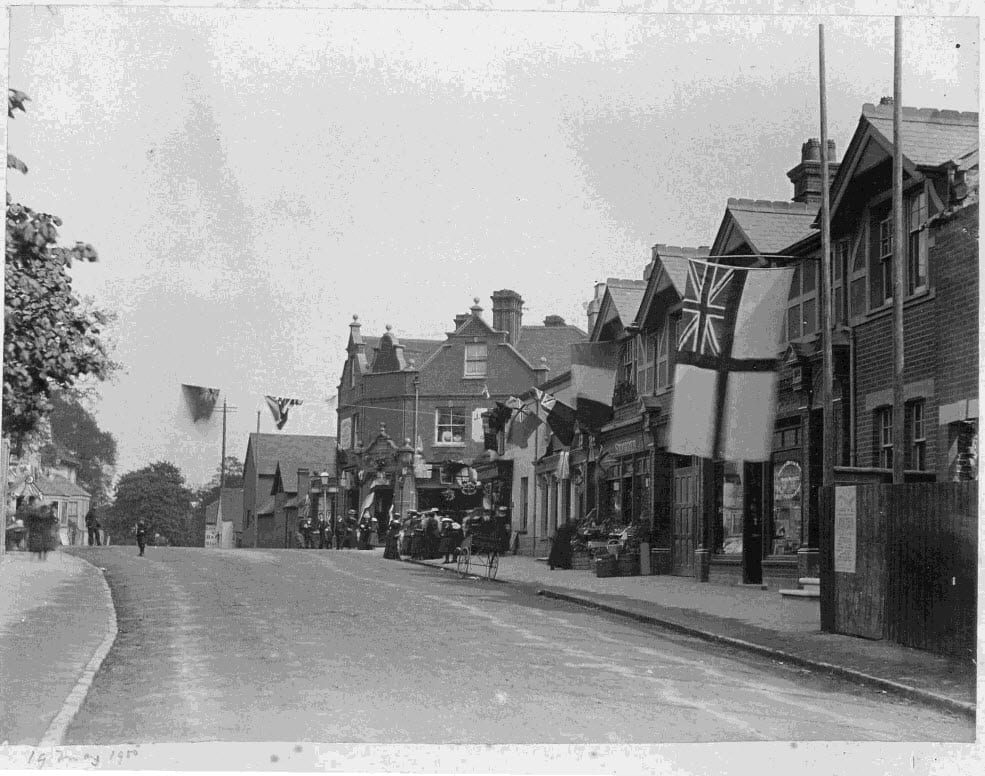 As part of this quest, I recently posted some pictures on the Bygone Bracknell Facebook page. Members helpfully identified the locations, and there was a great deal of interest in two particular images dated 19 May 1900 and featuring many Union Jack flags.A faint caption said "Queen Victoria passed through … Celebration of Relief of Mafeking, S. Africa". 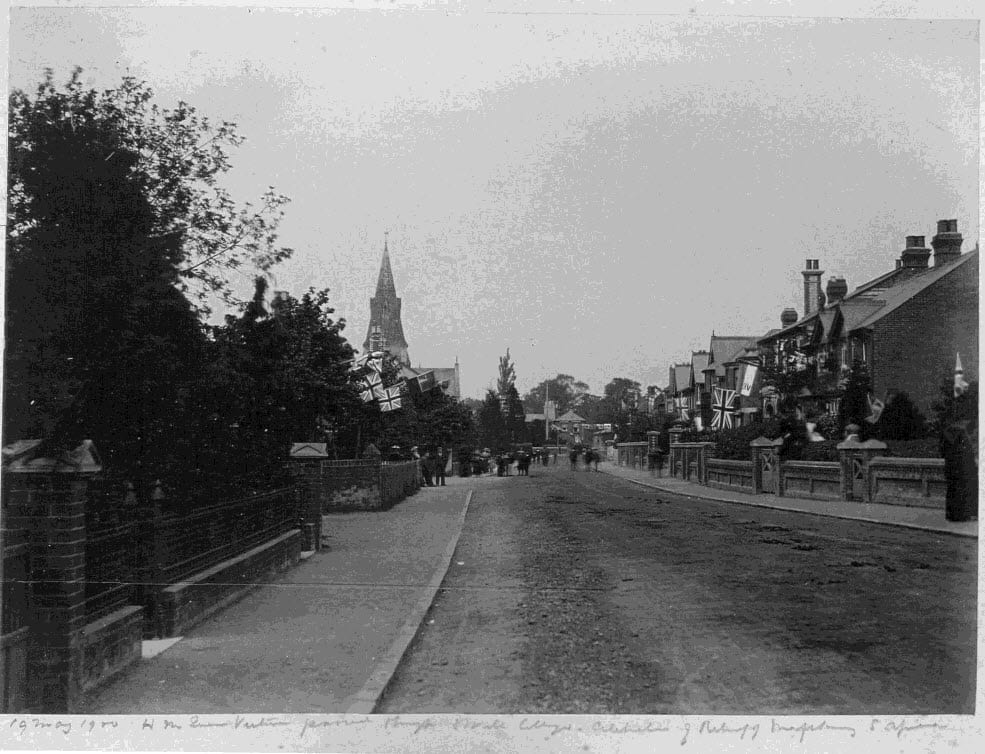 Challenged to find out more, I found the following article in the Reading Mercury of 26 May 1900:

THE QUEEN’S VISIT AND MAFEKING. Never in the memory of the oldest inhabitant of Bracknell has there been such good-natured crowd as assembled in this town on Saturday all on holiday intent. For some days previous it was understood that her Majesty would pass through on her drive to Wellington College, and great preparations had been made to accord her a loyal reception.

Early on Saturday came the news of the relief of Mafeking, and further efforts were made to celebrate the two auspicious events. No expense was spared, and Bracknell was "en fete" after mid-day, business then being practically suspended.

The route taken by her Majesty was through Winkfield, along Clay-lane the top of the High-street, thence along Church-road over the Station Bridge into the Crowthorne-road. The road was prettily decorated, every house making a gratifying display of either flags, bunting, mottoes, whilst various devices gay bunting spanned the road at intervals.

Visitors began to arrive about 1 p.m. from all the outlying districts, and took their positions the line of route, and by four o’clock, the time her Majesty was supposed to arrive at Bracknell, the crowd could be counted in its thousands, all waiting to give a loyal reception to the Queen.

About 4.30 p.m. a roar of cheering, which was taken along the line, announced her Majesty’s approach. Arriving near "The Elms" the horses were changed (a relay having been previously sent on and stabled at the Hind’s Head Hotel), and the journey resumed. Her Majesty was in an open carriage drawn by four greys, and accompanied H.R.H. the Duke of Connaught and the Dowager Lady Churchill. Two outriders and two cyclists made up the procession.

As her Majesty passed through the crowd cheer after cheer was raised and graciously acknowledged. The return journey was made about 6.30, when her Majesty again received a loyal welcome. During the time changing horses Miss T. Western, daughter of Mr. W. Western, veterinary surgeon, presented her Majesty with a lovely bouquet of white flowers, and Mr. H. Gregory presented a photo of General Baden-Powell, both presents being graciously accepted.

Besides the route taken by her Majesty, the whole of the town, especially the High-street, was gaily decorated, and all business premises were closed for a period, to allow the assistants to take part in the reception accorded her Majesty. The Bracknell Brass Band gave a selection of music and paraded the town in the evening.

“Fine day. ….. Started at half-past three with Arthur and Jane C. for Wellington College, Beatrice having preceded us. Changed horses at Bracknell. The whole way along people turned out and cheered, especially where there was an immense crowd, who came up quite close to the carriage, cheering loudly, and finally singing God Save the Queen.

Flags were hung up and pictures of General Baden-Powell exhibited in honour of the relief. The people are quite mad with delight, and London is said to be indescribable.

Reached Wellington College at five, …. Went first into the Chapel, where Mr Pollock showed us the memorial to the late Archbishop Benson, who was first headmaster of Wellington. Then was rolled in my chair to the Library and big dining-hall, through the Cloisters.

Re-entered my carriage, and drove to Mr Pollock’s house, where we had tea. Left again at six. …. A very fine arch was put up near Wellington College, on which was inscribed, “Welcome to the Queen of Mafeking.” Bracknell was beautifully decorated.”

Mafeking was besieged at the start of the Second Boer War in 1899 and the siege lasted 217 days, until 17 May. It had taken two days for the news to arrive in the UK. Despite the lack of instant news bulletins that we enjoy today, the British public had been following coverage of events over seven months and there was great celebration everywhere. What an exciting day that must have been for my great-grandparents and grandfather and other Bracknell residents!

The UK death toll at the siege was 212, with over 600 casualties. Boer losses were significantly higher. It was also where Robert Baden-Powell became a national hero. There is a memorial in Mafeking to those who fell in defence of the town.

The Berkshire Yeomanry was well represented in the Second Boer War, arriving there in early 1900, after the issuing of a Royal Warrant allowing volunteer forces to serve in the war, 24 December 1899, as part of the Imperial Yeomanry.

Recently, I was in Chester when the Queen and Duchess of Sussex (Meghan Markle) came to open a new theatre complex. A happy and busy day not dissimilar to the above – flags, decorations, and cheering from the large crowd, although no horses were involved in their journey. Good to carry on a family tradition!

The original photos are part of a deposit in the Berkshire Record Office, ref. D/EX1690

The Reading Mercury transcript is from the British Newspaper Archive online