North Moreton is a village and parish three miles east of Didcot. It lies on the line of a Roman road known as the Broadway, which enters the parish from the north, reappearing in a lane at the southern end. The road from Brightwell to Didcot, crossing the middle of the parish, is the Portway. The railway line from London to Bristol and Wales passes through the south of the village. Formerly Berkshire, North Moreton was transferred to Oxfordshire in the boundary changes of 1974. 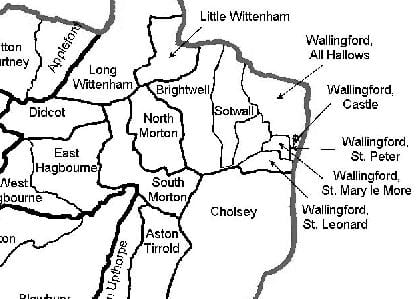 A transcript of MIs from the Primitive Methodist burial ground is held by Reading Library.

All Saints register records an unusually high number of weddings during the Protectorate (when weddings were secularised). This is said to be attributable to the locally resident Dunch family, relations of Oliver Cromwell.

The living of North Moreton is a vicarage in the deanery of Wallingford, archdeaconry of Berkshire, diocese of Oxford (before 1836, Salisbury). It is now within the Churn benefice.

The parish church of All Saints is thirteenth-century. The Stapleton family, who dominated the village for three centuries, added a chantry chapel dedicated to St Nicholas in 1295. It is said to have had a secret passage and priest’s hole.

A Primitive Methodist chapel was built in 1839.

A Parliamentary enquiry of 1833 found two daily and two Sunday schools in North Moreton, all funded in part by the vicar.

A National school existed by 1870, and still functioned in 1881, but no longer exists today.

The village website states that North Moreton had four pubs at the time of the building of the Great Western Railway: the Queen Victoria, the Star, the Victoria and the Bear. Two pubs – the Bear and one called the Dirt House – are listed in Duttons Directory of 1863; the Star is recorded in Cassey’s Directory of 1868 and in the 1881 census.

Only the Bear at Home survives today, claiming to be a fifteenth-century coaching inn, although this is hard to substantiate. At one time owned by Watneys, the Bear became a free house in 1971. The village website has more details of the pub’s recent history.

The village website history page recounts in detail a famous witchcraft case of the early seventeenth century, involving a woman originally from Kintbury, who was arraigned before the Star Chamber.

A fire in 1807, according to the Gentleman’s Magazine, burnt out three farmhouses, 10 cottages, livestock and hay along one side of the main street.

The enumerator of the 1851 census took his duties seriously, recording not only addresses (broadly), but also that nine village children were illegitimate, two more “fatherless” and one wife “deserted”. One unmarried couple were enumerated as “living as husband and wife”. Three residents were noted as “infirm”, and one an invalid.