The civil and ecclesiastical parish of Enborne adjoins Newbury on its eastern side. To the north run the river Kennet, the Kennet and Avon Canal, and the Reading-to-Penzance railway line. For centuries the river marked the northern parish boundary, but since 1991 it has been the railway. The river Enborne marks the southern limit of the parish, and also the county boundary with Hampshire.

The civil parish was measured at 2,500 acres at the turn of the twentieth century, but this has since been eroded on the eastern side of the parish by the encroachment of Newbury and Wash Common.

The ecclesiastical parish of Enborne lost ground to the Newbury Wash Common parish of St George’s, created in 1963.

West Berkshire Library a bound and indexed typescript of BTs.

Some register copies are also held by Wiltshire and Swindon History Centre, reflecting the parish’s former allegiance (up to 1836) to the Salisbury diocese.

The rectory of Enborne was usually held in plurality with Hamstead Marshall after 1816; the two were officially combined in 1926. In 1981 the parish joined the united benefice of West Woodhay, Hamstead Marshall, Inkpen and Combe under one rector. The united benefice lies within the deanery of Newbury and the archdeaconry of Berkshire, which transferred from Salisbury diocese to that of Oxford in 1836.

Enborne’s Anglican parish church is that of St Michael and All Angels. It stands on a hill overlooking Newbury, beside the former main farm of the village, and opposite one of two entrances to Hamstead Park. 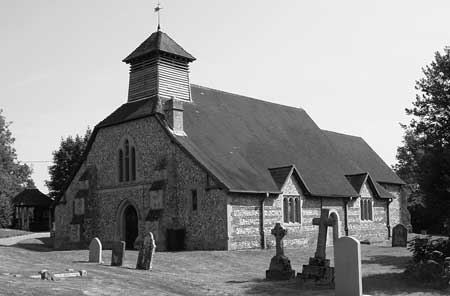 St Michael’s first appears in thirteenth-century documentation, but is thought to date from Norman times, with later additions. A restoration of 1878 revealed fourteenth-century wall paintings, one of which on the chancel wall, depicting the Annunciation, survives today.

A list of rectors dating back to 1255 is posted in the church, which is usually open.

The war memorial (pictured below) is inside the church. 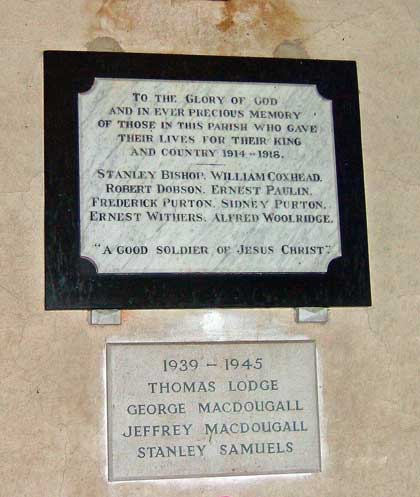 An independent chapel was set up in Wash Water (in the south of the parish in 1829). It veered between Congregationalist and Independent Methodist allegiance, and split into two separate congregations after a dispute in the 1950s. Both chapels are now closed.

A Primitive Methodist chapel was built in Wash Common in 1844, situated on the Enborne side of the parish boundary until the boundary was redrawn in 1934, bringing it into Newbury. The chapel was demolished in the early 1990s, but a plaque marks the spot.

Nothing is known of the registers of these chapels, but there are records about both in the Berkshire Record Office and in the West Berks Museum.

Several schools have operated in Enborne over the centuries:

Robert Brookes, rector of St Michael’s Church, ran a boys school, from about 1598 to 1607, as did one of his successors, Thomas Shephard, from at least 1806 to 1811. Later in the nineteenth century there seems to have been a dame school in Crockham Heath, subsequently taken over by a schoolmaster.

In 1725 Richard and John Smith willed a sum of money for the education of poor children, but records of how the endowment was spent had petered out by 1731.

The vestry ran schooling for village children from the late eighteenth century, which appears to have been taken over on a more systematic basis by the rector in the 1820s.

When rebuilt to conform with the 1870 Education Act this parish school became the forerunner of today’s Enborne Church of England Primary School, still in Crockham Heath. A log book from 1900 is filed at the Berkshire Record Office, and there is some correspondence relating to the school in The National Archives and Lambeth Palace library.

Enborne Lodge School was set up around 1980 for disadvantaged London boys. Funded at first by the Inner London Education Authority, it became in 1990 the responsibility of Lambeth council, who closed it amid controversy later in the decade.

The Craven Arms was mapped in the eighteenth century, but is probably older. Until the mid-nineteenth century (when it was acquired by the Craven estate) it was called the Three Horseshoes. It has changed hands many times since.

Enborne saw much of the fighting during the first battle of Newbury in 1643 although, sadly, the parish registers of that era have not survived, nor is there any contemporary account written from a local point of view.

Construction of the Kennet and Avon Canal in the late eighteenth and early nineteenth centuries affected the landscape along the northern edge of the parish.

Settlement is scattered, but the centre of the parish is usually considered to be the area around the church of St Michael and All Angels. In the south, alongside the river Enborne, lies a settlement known as Enborne Row (or Wash Water), which developed as a fringe of cottages along the edge of the former commons, but is now a hamlet of mostly detached, twentieth-century houses. Other houses cluster around the former commons of Skinner’s Green and Crockham Heath.

Local place names which have been lost include Sadmore (obliterated by the Newbury bypass), Trundle Hill and Bunker’s Hill, both lying at the southern end of Enborne Wash. The name Bunker’s Hill has transferred to a road in the postwar Wash Common housing estate.

The parish is predominantly agricultural. The largest farm in the village was always Church Farm (also known at various times as Enborne Farm and Manor Farm). Other farms whose names, if not their function, have survived are: Enborne Gate Farm, close to the edge of Newbury and probably on the site of a Roman settlement; Vanner’s, Hill and Boame’s Farms, on the rising ground to the south of the parish; Skinner’s Green and Crockham Heath Farms, both the products of enclosure; Enborne Street Farm; Bourne Farm (formerly known as Wash Water Farm) and King’s Farm also in the south; Wheatland’s and Wash (Common) Farms, also close to the Newbury boundary.

Farm names which have completely disappeared include Webb’s, Munday’s, Stocks and Wood’s.

In addition to farming, Enborne had an oil and bone mill on the canal in the second half of the nineteenth century. The village also supported a brick kiln, two smithies and market gardening.

The south-eastern corner of the (old) parish was the site of many Newbury racemeetings held until 1811.