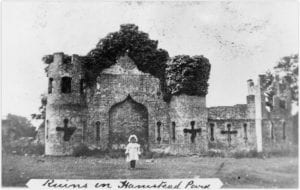 Sham Castle, a folly built in Hamstead Park in the 1790s, removed during WWI 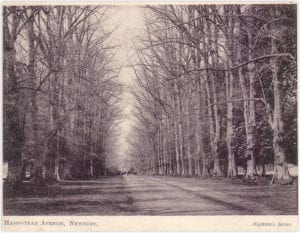 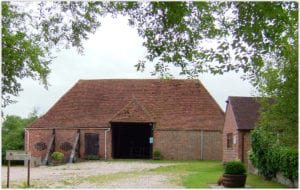 Hamstead Marshall is a civil and ecclesiastical parish four miles west of Newbury, in the south-west of Berkshire, on the border with Hampshire. The river Kennet runs across the north of the parish (as does the Kennet and Avon Canal) and it used to mark the northern boundary. Since 1991 this boundary has been the Reading-to-Penzance railway line.

The river Enborne marks the southern tip of the parish, bordering Hampshire.

The civil parish was created in 1894, and followed the same boundary as the ancient ecclesiastical parish. The two remained coterminous until 1991, when some changes were made to the civil parish, realigning the boundary with roads, and slightly reducing the overall area.

Newbury Library has a bound and indexed typescript of BTs.

Some register copies are also held by Swindon and Wiltshire History Centre, reflecting the parish’s former allegiance (up to 1836) to the Salisbury diocese.

(For reasons of its own, the GRO decided that Hamstead Marshall was in the parish of Welford for the purposes of the 1911 census.)

St Mary’s was at first a field church attached to the parish of Kintbury, becoming in 1241 a parish church in its own right, with its own rector and parsonage. From 1816 the rectory was usually held in plurality with Enborne, to which it was officially joined in 1926.

In 1981 the parish joined the united benefice of West Woodhay, Enborne, Inkpen and Combe under one rector. The united benefice lies within the deanery of Newbury and the archdeaconry of Berkshire, which transferred from Salisbury diocese to that of Oxford in 1836.

St Mary’s stands on a hill overlooking the river Kennet, close to the site of the former manor house, but relatively isolated from the post-medieval village. Built in the twelfth century, the original structure is mainly of flint and rubble. Major renovations took place in 1893 and in 1929. St Mary’s is detailed in Simon Jenkins’ 1000 Best churches, Mark Chatfield’s Churches the Victorians forgot and Nikolaus Pevsner’s Berkshire.

The churchyard is small and ancient. The earliest legible memorial is 1666, although many later inscriptions have become difficult to read.

The church is open regularly. If locked, visitors may gain access by contacting one of the churchwardens (contact details here) for a key.

The war memorial, pictured below, is inside the church. 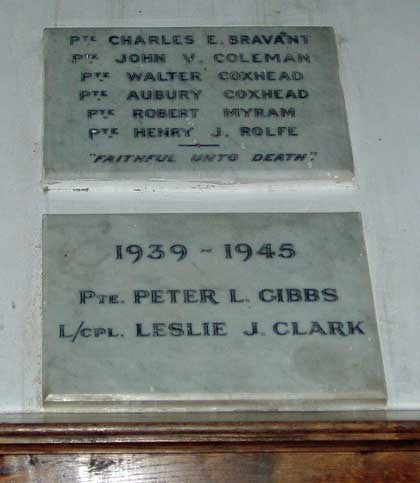 A Congregationalist chapel was built at what was then Upper Green and is now Chapel Corner in 1844. In 1936 it was converted to a private house. The BRO holds some records but no registers. 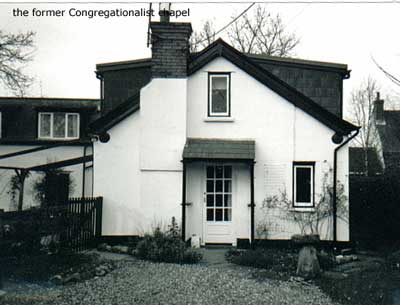 The population has always been scattered around the parish in a series of hamlets. These are  Ash Tree Corner, Chapel Corner, Holtwood, Irish Hill, the area around Hamstead Mill, the river Kennet and the church. This latter area was the site of the original Saxon village, which may have shifted southwards for natural demographic reasons, or may have been deliberately moved to obtain privacy for the sixteenth-century manor house.

The parish is predominantly farmland, although there is a good proportion of woodland, most of which has been in existence for centuries. Hamstead Park, originally a Norman deer park, takes up about 300 acres of the parish (straddling the border with Enborne); still in private hands, it contains two motte-and-bailey sites (a third is in an adjoining private garden, and all are registered ancient monuments) and eight pairs of imposing gate-piers which, together with a long run of Grade I-listed seventeenth-century brick walling, are the sole remains of the Craven manor house which burned down in 1718. Its replacement was a hunting lodge in the centre of the park, converted to a country house in Regency times, and still in private occupation.

The farmland is not of prime Kennet Valley quality, and local farms were not large. The largest was Elm Farm, owned by the Organic Research Centre from 1980 until sold off in lots in 2020. Other extant names are Holtwood Farm (now a riding stables), Hamstead Holt Farm (not within the parish since 1991), Barr’s Farm (still dairying), Plumb’s Farm (now Dogs Trust kennels), Little Farm and Salters.

A village school was founded by the rector in Hamstead Marshall in the 1820s. Although National in character, the school was not formally allied to the National Society until the 1890s. Rebuilt in 1892, it continued to take between 20 and 30 children until falling rolls closed it in 1933, and it became the village hall. Records from 1897 are filed at the BRO. 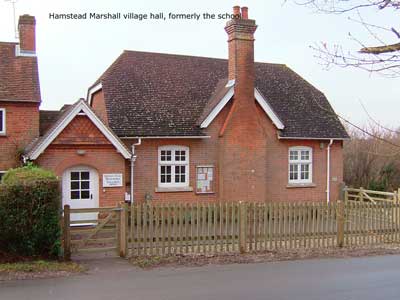 The White Hart served the village from at least the early nineteenth century (and probably much earlier) but ran into difficulties in the twenty-first century.  It had a chequered pattern of opening from 2005 to 2020, and is currently closed.