Harwell is an ecclesiastical and civil parish in the Vale of the White Horse, about three miles south-west of Didcot, formerly in northern Berkshire, but relocated since 1974 in Oxfordshire. It lies within the North Wessex Downs Area of Outstanding Natural Beauty.

The parish council site has some historical photos.

Harwell is a vicarage in the diocese of Oxford. The parish church of St Matthew is possibly twelfth-century.

A Wesleyan chapel was recorded in 1868.

Provision for a charity school was made in the will of Robert Loder in 1644; 12 poor boys (later increased to 25) were to receive instruction in reading, writing and arithmetic.

A National school existed in (and possibly before) 1868, and was probably the foreunner of today’s primary school.

The Harwell area has long been known for cherry-growing. The Old Cherry Barn is believed to date back to 1200. Cherry Teas were held in the eighteenth century. The former cherry orchards later became owned by Grove Farms.

RAF Harwell was built between Harwell and Chilton In 1937. After the Second World War the RAF station became the home of the Atomic Engergy Research Establishment, researching nuclear power under the aegis of the UK Atomic Energy Authority. Later it became known as Harwell Laboratory, and eventually, with the wind-down of nuclear research in the 1980s, the site has become a science and innovation business park, managed by an Australian property company.

Post-war, the local population expanded considerably with the Harwell Laboratory.

Harwell high street was the scene of a disastrous fire in April 1852, in which 55 buildings were destroyed. The event was written up in the Berkshire Chronicle, and in the Illustrated London News, including the illustration below. 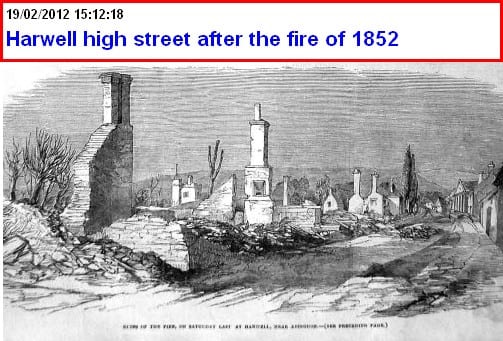