Thatcham lies three miles east of Newbury. The Great Bath Road (now the A4), the Great Western railway line, the River Kennet and the Kennet and Avon Canal all cross the parish from east to west. Thatcham railway station lies to the south of the town. The river Lambourn joins the Kennet in the west of the parish near Ham Mill. The river Enborne forms part of the southern border of the parish. 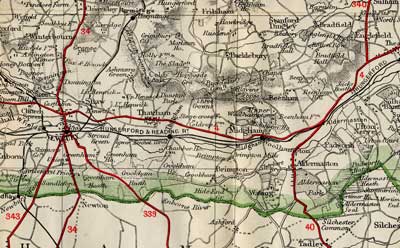 Thatcham area mapped between the wars

The village and parish formerly contained several tithings and hamlets which have now been split out into self-contained ecclesiastical and civil parishes:

The following concerns Thatcham only, as the settlements listed above are treated under their own headings.

after the separation of those settlements: Thatcham 5,936 acres (2,402 hectares)

Reading (Greenham was in Faircross)

Thatcham lies within the deanery of Newbury and the archdeaconry of Berkshire, which transferred from Salisbury diocese to that of Oxford in 1836. The living of St Mary the Virgin, (previously known as St Luke’s) is a vicarage.

The earliest detail of the church is the south doorway, dating from the later twelfth century. Some rebuilding took place in later centuries, culminating in a drastic renovation in 1852.

There were Congregational, Primitive and Wesleyan Methodist chapels in Thatcham, and a Plymouth Brethren meeting house, well into the twentieth century.

On the A4 is a small church school, formerly a chapel founded in 1304. It was converted to a Bluecoat School by Lady Frances Winchcomb in 1707, providing free education for 30 poor boys of the parishes of Thatcham, Bucklebury, and Little Shefford, and apprenticing some of them. It discontinued following the attainder of Lord Bolingbroke, who was the landowner and the only surviving trustee. The school re-opened for 40 boys in June 1794, and continued in existence until 1914.

A National school was built in 1826 on Clapper’s Green, land donated by William Mount.

There was also a British school attached to the Congregational chapel. Berkshire Record Office holds the minutes for 1900-19, 1952-60.

A primary school is named after Francis Baily, the renowned astronomer who was from an old Thatcham family, and who was eventually buried in the family vault under the parish church.

Thatcham has been continuously occupied since Mesolithic times. Under the manorial lordship of Reading Abbey in early medieval times the village rivalled Newbury for pre-eminence but lost its position following the Black Death. A degree of resurgence came with the turnpiking of the Bath Road in the early eighteenth century and the consequent trade from coaches which passed through Thatcham.

A large area of Thatcham, including the manors of the borough and Colthrop, was bought by Brigadier-General Waring from James, Duke of Chandos in 1722. Waring subsequently built Dunstan House, to the north of Thatcham village, and enclosed a large park around it, planted with trees arranged in the troop positions in the battles in which he had fought. When his descendants put his estates up for auction in 1798, Dunstan House failed to sell and was pulled down. The land is now a housing estate called Dunstan Park.

Two mills were built at Colthrop in 1472, one for corn and one for fulling. The latter was probably converted after the decline of the cloth trade. These mills were replaced by a paper-mill built on their site by 1799. This Colthrop Mill belonged to the Reed Group in the twentieth century and produced packaging materials.

The town is twinned with Nideggen in Germany. 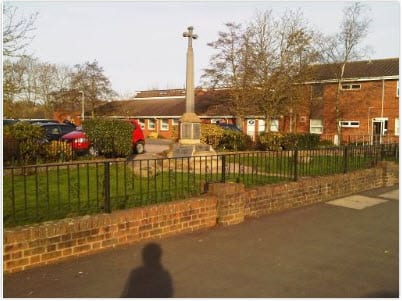 Thatcham War Memorial was erected in 1919 and dedicated in 1920.  It was restored in 1950 and again in 1990.  Originally situated in the centre of Thatcham in The Broadway it was moved to its present location on the A4, Bath Road, sometime after 1955.  It lists those who died in both World Wars.