Tilehurst is not mentioned in the Domesday Book but it appears there has been a settlement in the area for about 900 years.  The name is commonly thought to mean ‘a wooded hill where tiles are made’ but as the brick and tile production did not start in the area until the middle of the seventeenth century this definition of the name is unlikely to be correct.

Tilehurst is situated on high ground about three miles to the west of the town of Reading in the Royal County of Berkshire.  In the 17th and 18th centuries Tilehurst covered a large area including Calcot, parts of Theale, Grovelands, The City, The Gutter, Little Heath, Kentwood Common, Tilehurst Common, Harmour and Northcott. In each of these areas were small clusters of dwellings separated by farms, open common land and woods. Many of these names are still in use today although the hamlet of Harmour is now known as Armour and Northcott has become Norcot. Some of the modern local schools have names derived from farms and areas which were well known a few hundred years ago (Westwood Farm, Moorlands, Birch Copse, Little Heath, Upcroft, Churchend are examples). Theale parish (Holy Trinity) as formed in 1832 and the parish of Tylehurst St George created in 1887 in the Grovelands area, both out of Tilehurst parish so reducing its size considerably.

Tilehurst (then with a population of approx. 3,000) was absorbed into the Borough of Reading in 1911 but was still very much a village until after WW2 when housing was short. Building began in the 1950s and since then there have been many new housing developments making modern Tilehurst a residential area of Reading with a population of 15,500 in an area of 11 square miles. A few thatched cottages still remain, tucked away among the newer houses. 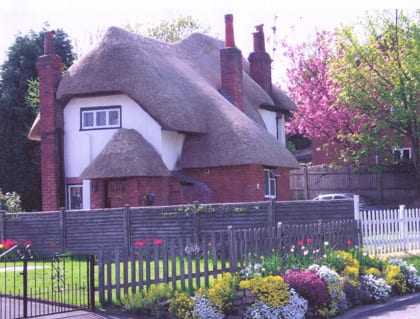 In 1881 the census shows that the majority of men were farm labourers, agricultural labourers, or employed in similar related occupations. A few men were brickmen at the local kilns. The first mention of brickworks was in the seventeenth century but the main works did not develop until about 1885. Clay was dug from the pits and carried by buckets on overhead tracks to the kilns at Grovelands which produced bricks for the houses being built in the Reading area. Great excitement was caused if one of the buckets overturned and deposited its contents on the ground below, although nets were placed under the tracks above the roads. Other kilns at Kentwood produced tiles and pots for chimneys. The last tiles were produced in 1967, the buckets dismantled, the clays pits filled and a housing estate built on the site now known as the Potteries. The occupations of Tilehurst people today are many and various with a great number commuting to London daily by train or to numerous other large towns nearby. There is no single major employer in Tilehurst in the 21st century.

To the south of the hill on which Tilehurst stands runs the Bath Road, the main highway from London to Bath and to the North is the Oxford Road. The roads to Tilehurst were and still are uphill from whichever direction you approach – some quite steep. The local carrier was unable to use some as they were too steep and treacherous for his horses. There was a carrier travelling daily to Reading from 1887. From 1936 trolleybuses served the main route through the village – these buses were propelled by electricity supplied by an overhead gantry which was connected to the top of the bus by two long poles attached to wires. When busses needed to pass each other the poles had to be disconnected from one bus to allow the other to pass. Occasionally the poles flew off the wires giving some spectacular sparks. The last trolley bus ran in 1968 by which time ordinary motor buses ran along several routes from the town of Reading to locations in Tilehurst.

The railway station was opened in 1882. The railway runs parallel with the River Thames and the Oxford road which is about a mile from the centre of Tilehurst. Few trains stop at Tilehurst Station today and most people travel from Reading Station which is easier to access. 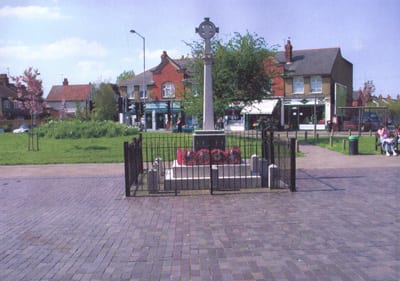 The ‘centre’ of Tilehurst is The Triangle so-called as it was originally a small triangle of roads with The Plough Inn, Post office, National School, a few shops and the War Memorial sited on the three roads with a small open space in the middle. The area has now been pedestrianised and the War Memorial re-sited in a safer position. Many local residents still refer to this part of Tilehurst as the Village. In the early 1800s the area was the site of ‘The Red Barn’ There are many other small shops in various locations throughout the area, but there are no supermarkets or department stores within the parish of Tilehurst.

The National School built in 1819 provided education, for a small weekly charge, for the many children who did not attend one of the small private schools in the area. Tylehurst Board School, which provided free education, was opened in 1890 and became Park Lane School twelve years later. When in 1906 Board Schools were abolished the Council built Norcot School and these two schools served the children of Tilehurst until reorganisation in the 1950s and new schools were opened.

Gas lamps were installed in 1906 and electricity arrived in the 1920s. Main drainage was installed in 1921. A reservoir built in 1902 was insufficient for the demand and so a tower was built in 1932 to provide an additional reservoir. This distinctive Water Tower is a well-known landmark and can be seen from many miles away. 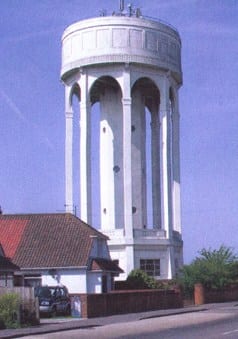 The Workhouse which was in existence in 1767 was closed and sold about 1843. Old maps show an area known as Workhouse Copse. The Mary Lyne Almshouses were endowed in 1851 by Mary Lyne of Burghfield for six widows – three from Burghfield and three from Tilehurst. They were built at the lower end of New Lane Hill and were occupied by female parishioners until early in the 21st century when they were sold to private individuals. 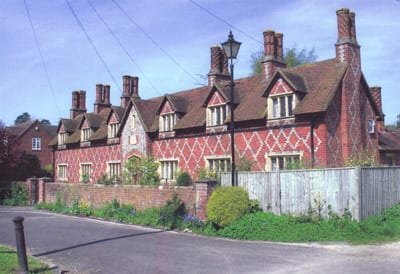 Ranikhet Camp was built in 1940 as additional accommodation and training for soldiers from the Barracks of the Royal Berkshire Regiment on the Oxford Road. In 1943 it was occupied by the US Forces for 18 months and then by some Prisoners of War and also families made homeless by bombing in the major cities. The Royal Army Pay Corps occupied the Camp from 1954 but in 1960 the whole area was demolished and a housing estate built.

The parish church of St Michael in Tilehurst dates from the 12th century and new parishes have since been created in Calcot (St Birinus), Little Heath (St Catherine of Sienna) and Kentwood (St Mary Magdalen). Each of these was originally a mission hall which later became daughter churches of St Michaels’ before becoming parish churches in their own right.

A Congregational Chapel was built in Armour Road in 1835 which was replaced in 1889 by a new building. The foundation stone of the new Methodist Church was laid in 1904 and the building completed in 1908. St Joseph’s Roman Catholic Church was built in 1956 while Tilehurst Free Church (Baptist) was opened in 1963. The Church of the Jesus Christ of Latter-Day Saints (Mormon) opened in Tilehurst in the 1970s and is one of the Family History Centres frequented by many local family historians.