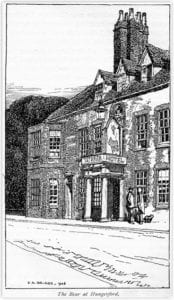 The Bear hosted the negotiations which replaced King James II with his son-in-law, William of Orange in 1688 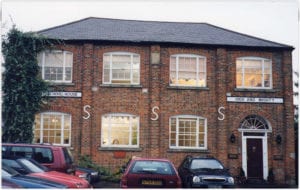 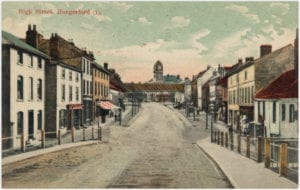 Hungerford is a small, historic, market town on the Berkshire/Wiltshire border, in the North Wessex Downs Area of Outstanding Natural Beauty. Until 1895 the town was divided between the two counties.

Two rivers – the Dun and the Kennet – meet below the town, the centre of which stands back from the A4 Bath Road, which has brought Hungerford prosperity, beggars and choking traffic over the centuries. The Kennet and Avon Canal passes through, as does the railway line from Reading to Devon and Cornwall.

The parish was formerly divided into four tithings: Hungerford Town, Sanden Fee, Eddington with Hidden, and Newtown with Charnham Street.

In 1894 the tithing of Leverton and Calcot, then in the Wiltshire parish of Chilton Foliat (although in the Berkshire hundred of Kintbury Eagle), was transferred to the civil parish of Hungerford, and the following year North and South Standen and Charnham Street, formerly parts of Wiltshire transferred to Berkshire.

To the east of the town is Port Down, 200 acres of common land where fairs, horse-racing and prize-fighting were held in the past. It is still managed as common land, with grazing. To the west is Freeman’s Marsh, owned by the Town and Manor of Hungerford, and maintained as a conservation area.

The map below shows the Hungerford area in 1792. 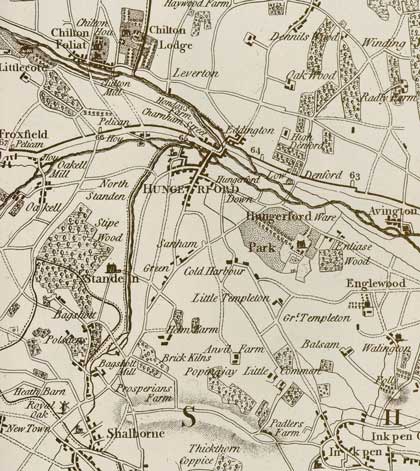 The Town and Manor of Hungerford

Hungerford lies within the deanery of Newbury and the archdeaconry of Berkshire, which transferred from Salisbury diocese to that of Oxford in 1836. 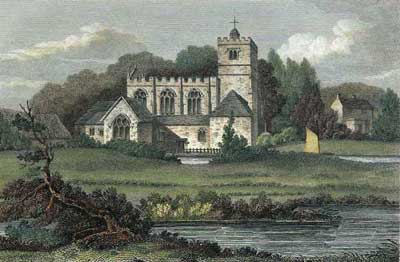 The main parish church of St Lawrence (pictured above in the early nineteenth century) stands in the Croft, west of the main street. This Georgian-Gothic style building of 1816 replaced the earlier, 700-year-old church, which had collapsed, but many monuments were transferred from the old to the new building. Another rebuild took place in 1880. The churchyard was closed and levelled by 1892.

St Saviour’s, Eddington, was built in Victorian Gothic Revival style on high ground overlooking the valley and the town in 1868. Manned by the clergy from St Lawrence, it served the northern part of the parish, seating 250 people, and was in regular use until it closed c1956. The churchyard is still used today, but the church itself is now a private house.

St Mary’s, Newtown, was opened in 1870, and in its early years served as a schoolroom for Newtown school on weekdays. It was licensed for Divine Service, but not for banns or marriages. Attendances declined in the second half of the twentieth century, and the church closed in 2006. It is now a private house.

A Wesleyan Methodist chapel was erected in Church Street in 1807. It was believed to be on a previous Wesleyan site, but no records of any predecessor exist. This chapel was replaced in 1869 by a building in Charnham Street (Bath Road). The Church Street premises were then used for a day and Sunday school. The Bath Road chapel closed in 1971.

The Primitive Methodist chapel was founded in 1830, when it formed part of the Shefford mission; a later chapel was built in Bridge St in 1864, and it became the centre of a circuit in 1869. A Sunday school was added in 1907.

Both Wesleyan and Primitives continued to meet separately until 1971.

A Congregational chapel was built in 1806, replaced by a bigger building in 1840; the original building was then used as a Sunday school.

In 1910 the voluntary schools were replaced by a single council school for all ages; not until 1963 did the John of Gaunt Secondary Modern School open, 19 years after the Education Act. It is now John of Gaunt Community Academy.

Between the eleventh and fourteenth centuries the manor of Hungerford passed between the Crown and various Duchies of Leicester and Lancaster, and in 1362 it passed to John of Gaunt, a name that is strongly associated with the town today.

The organisation of the Town and Manor of Hungerford has remained little changed for nearly 400 years. Office-holders include the Constable, the Port-Reeve, Bailiff, four Tutti-men, Water-Bailiffs, Overseers of the Common (Port Down), Keepers of the Keys of the Common Coffer, Ale-Tasters and the Bellman. The Bellman or Town Crier also holds the several offices of Assistant Bailiff, Beadle, and Crier for the Hocktide Courts.

The Hocktide Court is held in accordance with medieval custom each year on the second Tuesday after Easter, Tutti-Day. The Bellman summons the commoners to court, and events of the day include not only some formalities in the town hall but the nationally famous ritual of Tutti-Men with their floral staves touring the area, exchanging oranges for kisses from the lady of each house. After lunch at the Three Swans the "colts" (newly arrived residents) are shod. Rumour has it that in the past the shoeing used to be a little more robust, with nails sometimes being driven into feet.

In 1688 an unprecedented historical event took place in Hungerford. Prince William of Orange, having landed at Brixham in Devon, travelled with his army towards London to relieve his father-in-law of the Crown. King James II sent three commissioners to meet the usurper at the Bear Inn at Hungerford on 6 December. Plans were made here for the throne of England to pass to William, and for James to “escape” to France. The Bear is still an inn today.

In the eighteenth century Hungerford prospered as a service station to the coaching trade between London and Bath. Horses were changed and refreshment taken in a dozen or so inns which flourished in the town, including the Bear.

In the late nineteenth century two policeman were shot by poachers in Eddington. The murderers were hanged at Reading Gaol, and memorial crosses to the victims erected where they fell.

On 19 August 1987 a 27-year-old unemployed local labourer, Michael Ryan, shot and killed 16 people including his mother, and wounded 15 others in the middle of the town before fatally shooting himself. The tragedy remains, along with the Dunblane and West Cumbria killings, one of the worst criminal atrocities involving firearms in British history. The Hungerford Massacre, as it became known, led to the Firearms (Amendment) Act of 1988, which banned the ownership of semi-automatic rifles and restricted the use of shotguns with a magazine capacity of more than two rounds.

The War Memorial in Hungerford is situated on an island in Bridge Street.  Dedicated in 1921 it is almost seven metres tall and built of Dolton stone to commemorate the 76 local men who died in World War 1. 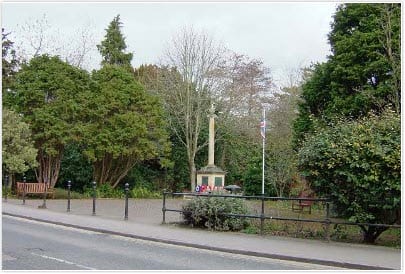