East Shefford was about half the size of West Shefford in acreage, but it supported only a tenth of the population, clustered mainly in the area around the church and manor house (pictured below in the early nineteenth century) beside the river, and also in Shefford Woodlands, a hamlet on the Roman Road known as the Ermin Way, now the B4000 linking Newbury with Swindon. 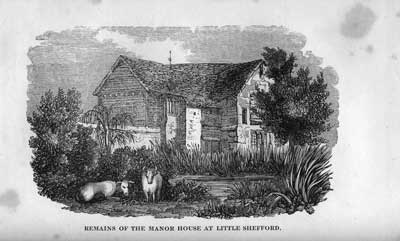 (There is also a Shefford in Bedfordshire.)

The village website www.greatshefford.org.uk is almost entirely concerned with the present-day village.

The former rectories of East and West Shefford, and the present-day rectory of Great Shefford, all fall within the deanery of Newbury and the archdeaconry of Berkshire, which belong to the diocese of Oxford (since 1836; prior to that, the diocese was Salisbury.

East Shefford: The church of St Thomas, standing on the north bank of the River Lambourn, was built around 1100 on a pre-Norman site. The chancel is thirteenth-century, and there is a sixteenth-century chapel. In 1841 and in 1861 the living was held in plurality with that of Avington.

The church of St Thomas was abandoned when a new church dedicated to the Holy Innocents was erected on the hillside above in 1869. This church was demolished in the mid-twentieth century.

The church of St Thomas, pictured below, survives unused and is now cared for by the Churches Conservation Trust. 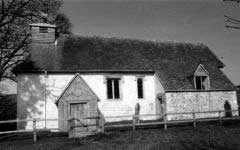 St Mary’s Church in West/Great Shefford dates from around 1200, and has a circular tower.

East Shefford is recorded as having had a small Independent chapel in 1837.

The Marquis of Downshire and the rector jointly founded a school in West Shefford  in 1820 to serve both villages.

A directory of 1837 found a small day school and a Sunday school in East Shefford. Children from East Shefford were also entitled to places in the school founded by Lady Frances Winchcombe in Thatcham, but it would probably have been impractical for many children to travel the seven miles.

Four daily schools were found in West Shefford in 1851. Casseys Directory of 1869 mentioned a parochial school of 80 children, supported by the rector and the Marquis of Downshire (the principal local landowner).

Berkshire Record Office holds a bundle of documents for Shefford National school on 1872.

Shefford Church of England Primary School is now joined with that of Chaddleworth.

East/Little Shefford: A Saxon burial ground was discovered in 1890 when the railway was under construction, and most of the objects found were sent to the British Museum. Since medieval times the village has numbered no more than a few dozen households, together with a rectory and manor house; part of the latter had become a barn by 1843. Wickfield Farm, Hidden Farm and Templars in Shefford Woodlands were and still are the chief farms.

West/Great Shefford: Charles I is believed to have stayed in West Shefford prior to the Second Battle of Newbury in 1644, although in The Monthly Review of 1785 it was written: Concerning this place [Shefford] and Brightwalton…they are so much out of the way, and so hid by woods, that as the tradition goes, they were not visited or molested by anyone, Royalist or Republican, during the whole course of the Civil War. An inscription, however, in the church register, seems a little to oppose this tradition, when it is said: "This was that Thomas Nelson that fought two dragoons in Hangman Stone Lane in the time of the civil war and was never well afterwards".

Hangman Stone Lane marks the border between Leckhampstead and Shefford.

Major houses in the nineteenth century were Woodlands House, the rectory, and the sixteenth-century manor house which stands next to the church. Traditional village activities have been farming and, since the nineteenth century, breeding and training racehorses. Farms listed in 1851 were Henley Farm, Fisher’s Farm, Northfield Farm, Lovegrove’s Farm and Park Farm. Several other farms are marked on the modern OS Explorer 158 map.

The Great Shefford enclosure award in the Berkshire Record Office is dated 1820.

The village now has several small businesses, including a small brewery, racehorse training yards and some light industry.

The Swan has operated as a pub so named on the Hungerford to Wantage road (A338) in the centre of West/Great Shefford since at least 1752. In the later nineteenth century the publican here also ran a substantial racehorse training yard from the premises. As a pub, the Swan still functions today and still has strong racing associations.

There appears also to have been a pub called the Harrow in West/Great Shefford in 1911.

There is a pub called the Pheasant in Shefford Woodlands which claims to date back to the sixteenth century, and which became famous some years ago for having been the local of Pop Idol Will Young.