Ashampstead is a village and parish six miles west of Pangbourne.

Former council houses to the east of the village’s recreation ground.

© Copyright Andrew Smith and licensed for reuse under this Creative Commons Licence. 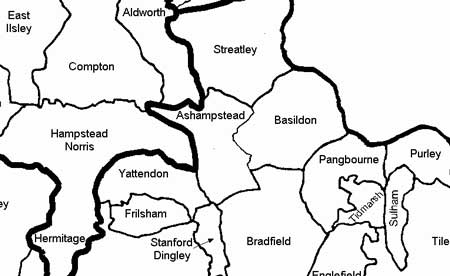 The living of Ashampstead was first a perpetual curacy, later a parish, in the deanery of Bradfield, archdeaconry of Berkshire, diocese of Oxford (Sailsbury up to 1836).

The church of Saint Clement dates from the early thirteenth century. In 1895 several eighteenth-century texts painted on the north wall of the nave were revealed as were thirteenth-century paintings under the plaster. 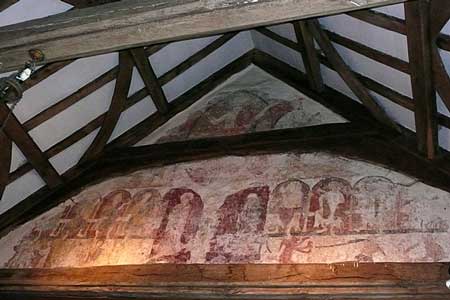 Copyright Graham Horn and licensed for reuse under this Creative Commons Licence.

A Baptist chapel was built at Ashampstead Green in 1840. The minister in 1851 was also the village baker and grocer.

A Primitive Methodist chapel at Quicks Green was rebuilt in 1872.

The VCH noted another dissenters’ chapel at Burnt Hill dating from 1864, the only one still in use in the early twentieth century.

Ashampstead had a National school educating 60 children in 1819. It was rebuilt about 1875 and enlarged in 1905, but no longer exists. BRO has a log book for the early twentieth century.

The parish plan mentions a former pub, known variously as the Fleece and Feathers and the New Inn.

Tags: Bradfield Union
« Back to Index