Ashbury is a hill settlement on the northern slope of the Berkshire Downs, said to be have been continuously inhabited for 5,000 years. The Ridgeway passes through the parish along the ridge which in the Dark Ages served as a barrier between the West Saxon and Mercian kingdoms.

Since 1974 Ashbury has been in Oxfordshire.

There is also a parish named Ashbury in Devon.

Vale of White Horse District Council, in county of Oxon

Baydon and Bishopstone in Wilts; Compton Beauchamp (the ecclesiastical parish of which was united with Ashbury in 1921), Shrivenham and Lambourn in Berks.

www.ashbury.org.uk includes a listing of all the surnames recorded in the village 1841-91.

Ashbury lies within the archdeaconry of Berkshire, which transferred from Salisbury diocese to that of Oxford in 1836. The church of St Mary is twelfth-century in origin. There was once a chapel at Chapelwick.

A Methodist chapel used to exist in Chapel Lane. It is now a private house.

Ashbury Mission Hall was a corrugated iron building opened in 1908, and replaced around 1972 by the Evangelical Free Church.

Ashbury claims the first Sunday School in the UK – founded at Ashbury in 1777 by the Rev Thomas Stock in collaboration with Robert Raikes.

A National school was built in 1864. It is now the village hall, the building having been replaced in 1961. Today’s primary school also serves Compton Beauchamp.

The parish abounds with sarsen stones, which are blocks of sandstone pre-dating the Ice Age; they were reputed to be sheep petrified by Merlin the magician, this being the origin of the stones’ alternative name of Grey Wethers. The local earthwork known as Alfred’s Castle is in fact much older. Wayland Smithy is one of several neolithic long barrows in the Downs.

Ashdown House (below), the largest in the parish, was built around 1665 by William, first Earl of Craven, about two miles south-east of the village. The park spread over 100 acres.  At the end of Queen Anne’s reign the house is thought to have been used as a retreat by Lord Bolingbroke when in political disgrace, and Jane Austen believed a later Lord Craven to have kept a mistress there. In the nineteenth century it became the family home of the earls of Craven, who used it as a base for hare-coursing, fox-hunting and horse-racing. The house was given by the Cravens to the National Trust in 1957, much of the estate having been sold off. It is now privately let on successive 25-year leases, but the staircase and cupola are opened to the public on limited days in summer time. 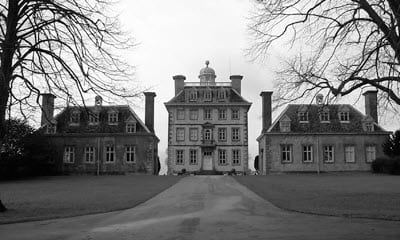 The old manor-house of Ashbury, now known as Chapel Manor House, dates from the fifteenth century.