St Joseph’s Convent is a familiar name in Reading. Today called St Joseph’s College, it stands on Upper Redlands Road but it hasn’t always been there.

In October 1894 four nuns from The Congregation of Sisters, which had been founded by Mother Marie Madeleine Postel in Normandy, made a difficult journey to Berkshire. After landing at Southampton they took the train to Farnborough where they met Father Ibos. He wanted to set up a school for Catholic families in his ministry, in the village of Bracknell. The hard-working Sisters, facing some local discrimination, created their school in an old outfitters shop in about ten days; it was dedicated to St Joseph. They must have made a good impression because, within six months, the number on roll rose from four to eleven, some non–Catholics. The numbers steadily increased to nearly forty and a connection was made with Professor Rey at Reading University College. It was his idea to move the school to Reading and eventually St Joseph’s Convent High School left its first home.

Professor Rey helped by finding two houses to rent on Castle Hill and even brought his own plants to decorate the entrance hall! Arriving in December 1901, the nuns again busied themselves with preparations, and over the Christmas holidays Catholic parents in the area were contacted, in an effort to find pupils. The new convent opened on 16 January 1902 with eight fee paying pupils, bringing in much needed income.

As the number of boarders increased, the adjoining houses in the terrace were added on as accommodation. One of these was the building known as the Round House, which had formerly been The Kings Arms Inn. It was here in 1797 that 342 French priests, fleeing from the Revolution had found sanctuary. By 1908 St Joseph’s Convent occupied six houses on Castle Hill but still there was not enough room for a growing school so Reverend Mother began searching around Reading for a new home.

She soon found the perfect place, adjacent to the recently established Catholic Church of St William of York, in Upper Redlands Road – Broad Oak House. But there was just one problem; it was already occupied by a Mr Sutton, seed merchant, who had no intention of selling it! The nuns were undaunted and prayers were made to Blessed Marie Madeleine Postel, followed by a novena (an ancient tradition of devotional praying in Christianity which consists of private or public prayers repeated for nine successive days or weeks) to St Joseph. Their prayers were answered and a letter arrived the day before the Feast of St Joseph, informing Reverend Mother that Broad Oak would soon be on the market. Permission to buy it was granted, loans to meet the cost of £5,000 were raised and the deal was signed on 9 November 1909. The Convent did not actually move in to their new home until March 1910; presumably work needed to be done to adapt the house.

Broad Oak had been built in 1870; the name derives from the magnificent oak tree growing in front of the house. When the Convent moved in, Broad Oak was enhanced with lawns front and back, in addition to also owning the piece of land to the east nearly reaching St William of York church. 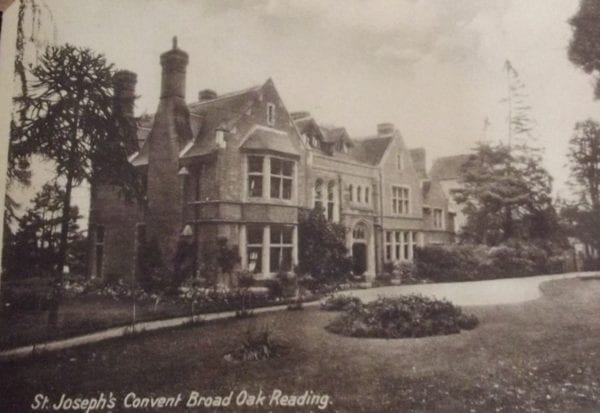 The school opened in March 1910; class rooms were ready but there was insufficient space to house 28 boarders. Luckily one of the parents came to the help of the nuns, namely Oliver Dixon whose children had been among the first pupils in Castle Hill. He was a well-to-do horse dealer living in Crescent Road, where he had business premises, but he also owned Mockbeggar House on Whiteknights Road overlooking the lake. Normally rented to a tenant, it stood unoccupied, so he offered it to the convent.  A former pupil described the experience:

‘Early days at Broad Oak were very pleasant.  We Seniors slept in a spacious dormitory on the first floor of the main building. I feel that the Sisters had very cramped accommodation and in order to help Reverend Mother Mr Oliver Dixon lent her his house, “Mockbeggar” in Whiteknights Road. This was a delightful spot for a summer dormitory. There was a wonderful garden and the roses were superb. We thoroughly enjoyed our stay in that house – totally empty except for our beds.’

Back at Broad Oak construction work on the adjacent block started in the spring but there were delays. During this time 68 day pupils had their lessons in a house called Coburg Lodge on London Road. By September 1911 they had moved in to their own ‘day school’ built at the top of Eastern Avenue and the boarders were now fully accommodated at Broad Oak, in the newly built extension.

After 1918 a much-needed chapel and a gymnasium were added to the school. This was followed by a huge programme of expansion, which included a large hall, music rooms, a domestic science block and other class rooms. The outcome was that by 1936, all the day pupils and the boarders were now on the same site in Upper Redlands Road, sharing the same facilities; it was at this time that the brown and gold uniform was adopted. 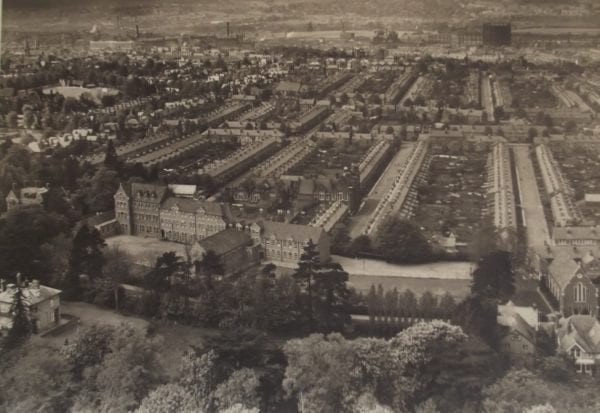 In 1947 St Georges Hall (belonging to the University) on Christchurch Green was purchased to be used as the Prep School. During the 1950s and 1960s up at Broad Oak there was more development: science laboratories, a swimming pool, a gym and a beautiful new chapel. Then in 1988 a specially designed Prep School was built in the orchard, to replace the dilapidated building on Christchurch Road.

In the early 1900s boys could stay at the Convent up to the age of 11; then later only up to the age of seven. This was to change in 2010 when boys began to be admitted through to the sixth form and the co-educational school for 3 – 18 year olds was renamed St Joseph’s College. Two years later, its first Headmaster was appointed.

There was one more big change: in 2018 the three old houses of Clitheroe Jude, Augustine Postel and Bernadette Isadore were replaced with four new ones. It was decided that they would be named after some of the first pupils’ families. So DIXON, HUMMEL, JENNINGS and RICHARDSON were all chosen from the 1902 register. The College has plenty of background information on the Dixon family.

However, they are very keen to find out more on the other Catholic families. It is believed that Jennings were local butchers. Hummels had a watch shop in Bridge Street and later a jeweller’s shop in Pangbourne.

If anyone has information on any of these four families, then Julie MacLean, Alumni Coordinator at St Joseph’s College, would love to hear from you. She can be contacted by email at: 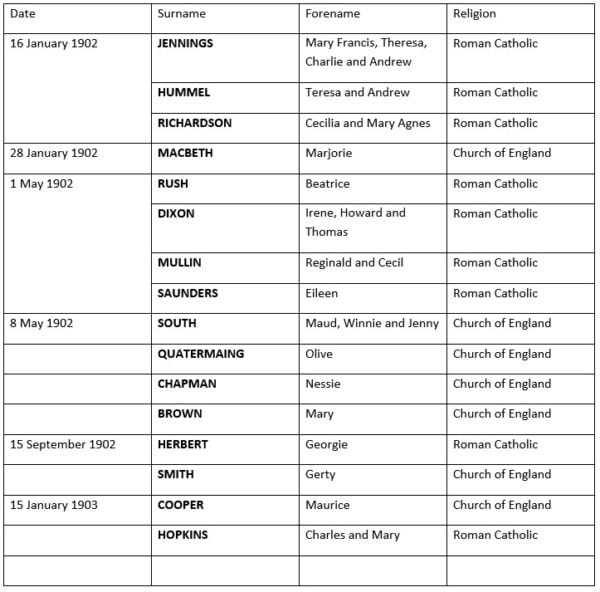 All photographs by kind permission of St Joseph’s College