Lambourn, spelt with or without the u, and with or without an e on the end, lies in the valley of the river Lambourn, a summer bourn in the Berkshire Downs. It is 13 miles (21 km) north-west of Newbury and seven miles (11 km) north of Hungerford. When the Vale of the White Horse was transferred from Berkshire to Oxfordshire in 1974 Lambourn became the most north-easterly parish in Berkshire, bordering Wiltshire to the south and west and Oxfordshire to the north and west.

The village itself, also known in the past as Chipping Lambourn, as it was an important market centre, lies in the centre of the parish. Former tithings within the parish are

together with the hamlets of Mile End, Sheepdrove, Kingswood and Bockhampton(formerly Lower Lambourn, a village which disappeared in the sixteenth century).

Lambourn is of ancient foundation, having been mentioned in the will of King Alfred the Great. Despite two ancient roads running through the parish − the Ridgeway and Ermine Street − the parish suffered from poor communications until the late nineteenth century.

The parish includes and adjoins the Berkshire Downs, chalk upland which contains many prehistoric sites, including Seven Barrows (which numbers many more than seven) and the White Horse of Uffington, Berkshire’s county emblem, which now lies in Oxfordshire.

(Lambourn in Berkshire should not be confused with Lambourn in Essex.)

In 1851 all these parishes except Baydon and Ramsbury were in Berkshire. Since 1974 the only Berkshire parish adjacent to Lambourn is East Garston.

Lambourn lies within the deanery of Newbury and the archdeaconry of Berkshire, which transferred from Salisbury diocese to that of Oxford in 1836.

The parish church of St Michael and All Angels is a Saxon minster, first mentioned in 1032. The original Norman structure was added to over the centuries, and restored comprehensively in the nineteenth century. It has two chantry chapels.

The benefice has not always been regarded as a plum posting for clergymen. The Rev James Smith, arriving in 1776, soon fell out with his parishioners over fund-raising for a new parsonage, and matters then degenerated into a lawsuit about tithes. He spent years pleading for a transfer, but was ignored by his superiors and eventually died in Lambourn in 1813. His legacy was a home-made sentry box from which he would conduct graveside services in bad weather. It was still used by his successors 70 years later.

One of these, the Rev Robert Millman, was appointed to the living in 1851 and spent the next decade “toiling day and night to reform one of the wildest and most neglected parishes in the diocese of Oxford.” He built a school, restored the church, founded a choir, and campaigned vehemently against what he considered to be the abuses of the Turf. Nonetheless, his pastoral care of trainers and racing employees was said to be exemplary.

Lambourn Woodlands, St Mary’s Church was built for a parish newly created in 1837 to serve 300 residents in the south of the parish, then very remote and wild. Built in 1852, it was designed by Thomas Talbot Bury, who was trained by Augustus Pugin. St Mary’s is no longer used for services, and is in the care of the Churches Conservation Trust.

Eastbury St James the Greater is was also built in the early 1850s by another enthusiast for the Gothic style, G E Street, who also designed the Royal Courts of Justice. The most famous feature of the church is the engraved glass Whistler window dedicated to the poet Edward Thomas. St James now shares its vicar with St Michael and all Angels in Lambourn, and All Saint’s Church in East Garston.

The Catholic  church of the Sacred Heart is on the Baydon Road, Lambourn.

The VCH describes an ancient free grammar school based on the Estbury almshouses, refounded in 1589. It also notes a school for poor children, endowed in 1791.

The Reading Mercury in 1814 advertised a school in Lambourn run by Mrs Hu(r)lett.

The 1833 Parliamentary return of schools found eight daily schools in Chipping Lambourn, in addition to one fee-paying daily and boarding school for boys, one daily and Sunday school funded by Henry Hippisley for girls, and several Sunday schools including one attached to the Wesleyan Methodist chapel. The tithings of Blagrave with Hadley, and Eastbury with Bockhampton, also each had their own daily schools.

Details of today’s primary school can be found here.

On the north side of the church are the Isbury or Estbury Almshouses, founded in 1501 to house 10 poor people, and a free grammar school. The houses were rebuilt by the Rev Henry Hippisley of Lambourn Place in 1852, in red brick with an embattled entrance-tower and a small cloistered courtyard. Also adjoining the churchyard are the Place Almshouses, founded at a rather earlier date by the Roger family, refounded by Jacob Hardrett in 1625, and rebuilt in 1827 by the Henry Hippisley. They have been known in turn as Roger’s, Essex’, Hardrett’s and the Place Almshouses, most of the patrons being owners of Lambourn Place.

Lambourn Place, former home of the Hippesleys, adjoins the almshouses and the church, its small park extending northwards. The present building in the Elizabethan style dates from 1843, replacing a medieval predecessor.

Horse-racing first came to Lambourn under the patronage of the fifth Lord Craven, occupant of Ashdown Park (upper Lambourn). John Rocque’s map of 1761 marks his racecourse on Row Down, a mile or two west of Upper Lambourn. This race series died out with enclosure in the early nineteenth-century, but interest in local training was generated with the success of Wild Dayrell  in the 1855 Derby. This horse trained on Weathercock Down, causing other trainers to wonder about the special qualities of downland turf. Horse-racing was revived at Lambourn briefly in the 1870s, but the training industry endured and developed, and still dominates the village today. 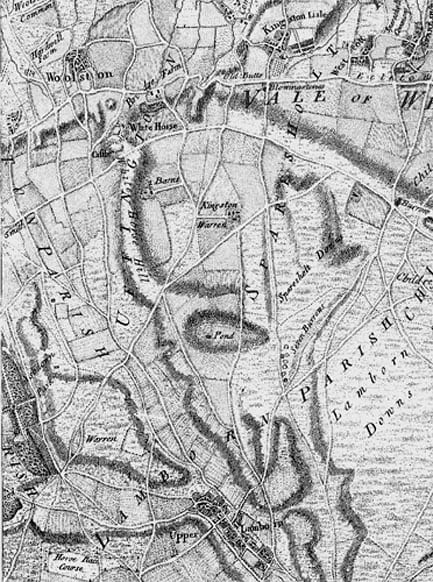 In the bottom left hand corner of this map of Upper Lambourn (Rocque, 1761) the race course is clearly marked.

In the late nineteenth century Lambourn, like many rural areas, needed an economic lift. The growing racehorse training industry could not entirely offset the ravages of agrarian depression. Several of the larger houses stood empty, and many cottages were falling into ruin as the population left to seek work in towns. The once famous market had dwindled down to two old farmers gossiping in the George.

Rescue of a sort came in 1897, when the Lambourn Valley Railway was completed. No longer did travellers have to walk nine miles from Lambourn to the nearest station. The single-line track from Newbury carried a regular passenger and freight service through the valley, including of course racehorses, and it even prompted the early stirrings of local tourism. Socially useful but never profitable, the line fell to Lord Beeching’s axe in the 1970s.

On 8th September 1944 a stricken B24 Liberator would have hit Lambourn had it not been for the heroism of the pilot, 2nd-Lt Lawrence Berkoff of the USAAF, who remained at the controls after the crew had parachuted to safety to divert the aircraft a few hundred yards away from the village. Berkoff was awarded a posthumous Distinguished Flying Cross, and a plaque in his honour was unveiled at Lambourn Memorial Hall in 2003.

In 1953 a road tanker loaded with 3,600 gallons of aviation fuel lost control on Hungerford Hill, and careered down Lambourn’s high street destroying houses and eventually bursting into flames. Miraculously no bystanders were killed, although the driver died and 26 people were made homeless.

The village has made its literary mark several times, being the inspiration for Whitbury in Charles Kingsley’s novel Two years ago in 1857, and also featured as Maryland in Thomas Hardy’s Jude the obscure of 1895. In the 1920s Hilaire Belloc fell under the spell of downland scenery and wrote

And once atop of Lambourn Down, towards the hill of Clere

I saw the host of heaven in rank, and Michael with his spear.