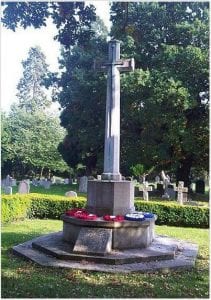 The recently published survey of the Burghfield St Mary Memorial Inscriptions (BRK0287) contains lists of the 55 men who were killed in the two world wars. The names are recorded on the war memorial and also in an illuminated book which is displayed in a glass-fronted case inside the church. These records are just the surnames and initials; no dates or any other detail. A marble wall plaque in the church contains the family details of one officer, and there are four Commonwealth War Grave Commission (CWCG) stones in the churchyard. This article describes the techniques used to try and identify the people behind the other names, and also records the 31 other people, with connections to Burghfield, who died in these conflicts.

The main face of the war memorial contains the Great War dedication, and the second face has the names of officers and sergeants starting with Bullivant, R P. The Commonwealth War Grave Commission website, finds:

Findmypast contains links to several military collections including the Imperial War Museum, which has a photograph of Captain Bullivant. Neither of these sites make any reference to Burghfield. However, a search of the newspaper collection found an extract from his will and the National Probate Calendar on Ancestry also lists his three addresses, starting with the Mill House, Burghfield. The newspaper article (Pall Mall Gazette 11th January 1919) also includes this extract:

Executors endeavour to purchase from the government his two chargers “Mike” and “Joe” and if successful to hand them over to his friend and brother officer Arthur Macdougall, or to make such other arrangements so that they may have a comfortable home.

The next name is for George Ouvry William Willink, and the marble plaque in the church lists his family. The CWGC record is:

This record contains a clue to checking other names on the memorial, in that he was in the Royal Berkshire Regiment, which would have been the first choice for local recruits. The CWGC search has a box whereby a regiment can be chosen from a drop-down list. Entering ‘Berk’ leads to a list including the Royal Berkshire Regiment and the names on the memorial were checked for this. Another name from the war memorial is Bunce E, and one name shown in this way is from Cheriton, Alresford which could be possible. However, this record is of a private, and the information on the CWGC memorial states that he was an NCO. A later search found Lance-Corporal Ernest Edward Bunce from the Berkshire Yeomanry, ‘Son of William Robert and Ellen Elizabeth Bunce, of “The Laurels,” Burghfield Common, Mortimer, Berks’.

Around half of the names on the war memorial are found in the ranks of the Royal Berkshire Regiment, but only eight of these are noted as having links with Burghfield. Two of these are buried in the churchyard. Captain Willink has a memorial stone in the churchyard and the CWGC site records his burial on the Somme. Without any filter, it would take an inordinate amount of time to check all names on the memorial. As an example, there are 88 records for Cooper S.

The CWGC site does have additional filters; the most useful in this case is Additional information. Clicking this link opens a box, and entering ‘Burghfield’ restricts results to records to those that include that word. It is not necessary to enter any more information, and a search produces 20 records where Burghfield is mentioned in the notes. This is half of the WW1 records, but five of these are not recorded at Burghfield church.

The next source searched was findmypast, where a similar technique was used. Opening the search page for Military records and selecting WW1 in the side menu, Burghfield can be used as a filter in Optional keywords. This then says there are 183 results, which can be slightly reduced by putting the year of death as 1916 ± 2.

These records can then be sorted using the keys at the head of the columns, and by clicking on Died, it is seen that the first four pages do not record a death, despite the selection of Year of death on the search page. This reduces the number of records to 59, and this represents 50 individuals because of the use of several databases. Half of these are not on the Burghfield war memorial.

One record from the war memorial was for Sellwood, D W and this did not occur on the CWGC database. This record was found on findmypast.com as William George Sellwood #5807 of the Royal Berkshire Regiment recorded in ‘Soldiers Died in the Great War database © Naval and Military Press Ltd 2010′. His residence and birthplace are listed as Burghfield. The original transcription on the CWGC database had been Selwood and, as the search engine does not use similar names, it did not appear in searches. It has now been updated.

At this stage only eight on the original list were not identified and other methods were tried to identify them. A similar search was made for S Bright and E Goddard on the 1911 census, to find possible connections with Burghfield. Potential matches were found, but as yet there is no other proof that these are the names on the war memorial. Some effort has been made looking at newspaper records without success.

Better success has been with the name Green, A L. Albert Leonard Green was living at Burghfield Hatch in the 1911 census, aged 11. Findmypast has two records for A L Green. The first is for his enlistment into the Royal Air Force on the 1st February 1918, which corresponds with a call up at age 18. The second is for his death 4th September 1919 in Archangel.

Similar searches were made on the 15 names from WW2. The CWGC site has five containing reference to Burghfield, two of them being in the churchyard at Burghfield. Another eight records (including two non-military) are also found.

The name Heath, F N only produced one record for Frederick Nolan Heath, but no information on place in Berkshire. However, the date of death and age at that time gives a 1916 date of birth which leads to this record in June 1916 on FreeBMD

The CWGC record names his parents and the 1939 register shows them living at Lodge Cottage, Bradfield RD.

There is only one record for W E Wise who died in 1941, aged 33. A search on Berkshire Baptisms found William Ernest Wise baptised in Burghfield in 1907.

The CWGC record for Kirkwood, T G H is for Major Tristram Guy Hammett Kirkwood, but contains no other information. However a birth was registered in 1916 at Bradfield, which includes Burghfield, as

While researching the names recorded at St Mary, Burghfield, 24 other names were found with references to Burghfield and WW1, together with 7 from WW2, two of these being civilians who died in London.

The names of those lost in WW1 may be missing from the war memorial because the families of those men did not put their names forward for inclusion to the Burghfield War Memorial Committee at the time funds were being raised to build the memorial in the early 1920s.