Brimpton is a parish and village east of Newbury, on the rivers Enborne and Kennet, on the Hampshire border. The village adjoins the 4,000-acre Wasing estate.

There is another Brimpton in Somerset.

Brimpton lies within the deanery of Newbury and the archdeaconry of Berkshire, which transferred from Salisbury diocese to that of Oxford in 1836. The living is a vicarage.

Two churches were recorded at Brimpton in Norman times, when the parish was served by the minster church at Thatcham. One of them used to stand at Brimpton Farm: the chapel of St Leonard, the Domesday church of Shalford Manor, was secularised in 1614. It is currently listed by English Heritage as “at risk”.

The present-day church of St Peter was built in 1859 in fourteenth-century style. 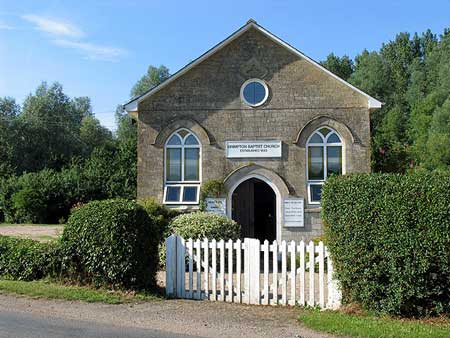 Brimpton’s Baptist chapel, pictured above, was established in 1843.

Parliamentary papers of 1819 record a school for about 40 children, which may have been a Sunday school. A school was founded by the Earl of Falmouth in 1844, and still serves the village today as Brimpton Primary School. 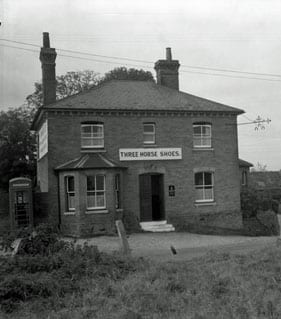 The Three Horse Shoes Inn was enumerated in the 1851 census, and still stands today, although looking somewhat different.

The Pineapple on Brimpton Common is now closed.

Borson Barrows, five Bronze Age round barrows, were referenced as boundary markers in a Saxon charter of AD 944.

Brimpton featured in the Swing Riots of 1830.

Seven almshouses were built and endowed in 1854 by the Countess of Falmouth, and called St Peter’s Almshouses.

Brimpton was enclosed in 1811.

In 1851 Brimpton had a post office (under Reading) run by a cordwainer who employed five men. (The village still has a post office today.)

Two mills existed in 1851: Brimpton and Hyde End. Hyde End was converted into a trout hatchery in the late nineteenth/early twentieth century. 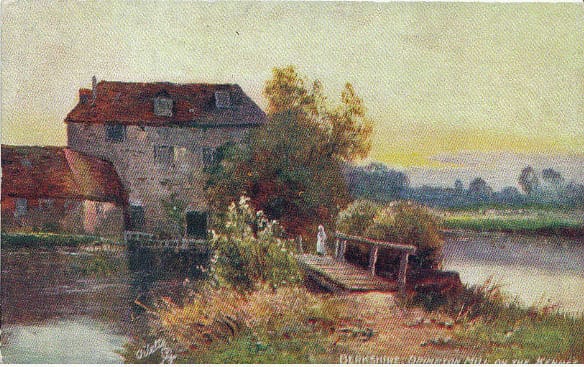 In the early twentieth century the greater portion of the Brimpton estate was bought by William Mount of Wasing Place. Brimpton airstrip, a 500-metre grass runway, was laid out in the 1950s by Sir William Mount. It is located one mile east of the village, and is the base for a few light aircraft and a flying club of 50 members. www.brimpton-airfield.co.uk.