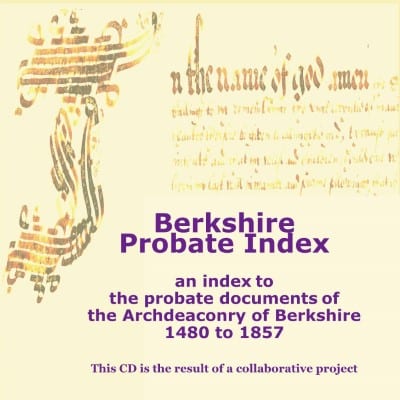 Wills are one of the most valuable resources for family history researchers and are particularly important once the research progresses back into the parish registers and we no longer have the censuses to provide confirmation of family groupings. The Berkshire Record Office (BRO) holds a very large collection of wills, but the records have previously been difficult to access for anyone not living locally because the only available finding aids were typed indexes which had to be consulted at the BRO. A printed index to some of the very early Berkshire wills was published back in 1893 but is now of little use because it was compiled before the probate records were transferred to the BRO and therefore does not include the necessary BRO references. The new Berkshire Probate Index CD now provides an easy way for researchers anywhere in the world to find out if their Berkshire ancestors left a will or other probate document, and gives all the details necessary for the researcher to order the records from the BRO. Anyone wishing to visit the BRO in person can now compile a list of the records they wish to consult in advance so that they do not waste valuable research time locating the appropriate reference.

The Berkshire Probate Index CD is the result of a four-year collaborative project between the Berkshire Record Office, the Berkshire Family History Society, the Berkshire Local History Association, the Berkshire Record Society and the Oxfordshire Family History Society, all of whom provided both practical and financial support. The project also received assistance from the Marc Fitch Fund. A team of dedicated volunteers have contributed thousands of hours of their free time to compile the index. Significant errors were found in the original printed indexes, and it was necessary to start from scratch and create an entirely new index for the years 1480 to 1652. The later typewritten indexes were found to be more accurate, but a considerable amount of checking was still required, and there was also a huge amount of work involved in inputting the data into a fully searchable database.

The CD provides an index to the probate records of the Archdeaconry of Berkshire, which constitute the majority of probate documents held at the BRO. The earliest indexed document is the will of John Hornehurst of Wallingford St Mary which dates from 1480, and the index goes right through to 1857, the last year in which probate came under the jurisdiction of the church courts. From 1858 onwards probate became the responsibility of the state, and these records are now handled by the Probate Service.

Over 39,000 individual records have been indexed, including over 23,000 wills and more than 10,000 grants of administration, as well as many other lesser known records such as tuition bonds, court papers, and excommunications. In the sixteenth and seventeenth centuries wills were often accompanied by inventories which give a detailed account of the deceased’s belongings, and can provide a fascinating insight into the lives of our ancestors. The Berkshire Record Office has a particularly rich collection of inventory records, and these are also included in the index.

The CD provides details of the name of the deceased, the occupation, the parish, the year that probate was granted, the types of document available, and the full BRO reference. There is also a column which provides additional notes on the status of the deceased such as alias names and whether a woman was a spinster or widow. The index can be searched in a variety of different ways including by surname, by parish (both old and modern names), by occupation and by date. It is also possible to search for probate records which are accompanied by inventories or by probate accounts. These latter finding aids will be particularly appreciated by local historians and social historians.

Prior to 1858 there was a three-tier system of church courts. The Prerogative Courts of Canterbury and York mostly handled the probate affairs of the richest members of society who had property spread across different jurisdictions, though these wills can also include the records of mariners, those who died at sea and ordinary individuals who just happened to own property in a different county. The diocesan or consistory courts were the middle tier and dealt with the probate records of individuals who owned property in more than one archdeaconry. The archdeaconry courts were the lowest tier and dealt with the middling ranks of society who owned property within a single archdeaconry. Not surprisingly, a large number of the wills indexed on the CD relate to individuals who are identified as yeomen, husbandmen or farmers, and especially so in the earlier centuries, but there are also wills for tradesmen and craftsmen including wheelwrights, carpenters, blacksmiths, bakers, millers, innkeepers, cordwainers and tailors. There are also a few wills for the more humble members of society such as labourers and bricklayers, and even a solitary will for a postboy. Amongst the more interesting occupations I found an umbrella maker, a prison keeper, a mole catcher, a language professor, a gingerbread baker, a hair weaver, and a peruke (wig) maker.

The Archdeaconry of Berkshire corresponds almost exactly to the boundaries of the pre-1974 county of Berkshire and includes the parishes of North Berkshire and the Vale of the White Horse. Although the bulk of the records in the collection relate to Berkshire, there are also some records from the surrounding counties of Oxfordshire, Buckinghamshire, Hampshire and Wiltshire, as well as a few references to probate records from more distant counties as far away as Devon, Somerset, Lancashire and Denbighshire. There is even an 1836 will from Buffalo, USA, and an 1845 will from Flanders!

A small number of Berkshire parishes fell outside the jurisdiction of the archdeaconry and were included in the courts of exempt jurisdictions known as “peculiars”. There were three peculiars in Berkshire: the peculiar of Faringdon, including Little Coxwell; the peculiar of the Dean and Canons of Windsor, comprising Hungerford, Shalbourne and Wantage; and the peculiar of the Dean of Salisbury, which covered Arborfield, Blewbury (including Aston Upthorpe and Upton), Hurst, Ruscombe, Sandhurst, Sonning and Wokingham. Probate records proved in these peculiars are not included on the CD, though a number of wills for people in these parishes were proved in the archdeacon’s court and are included in the collection.

The probate records for the Peculiar of Faringdon are held by the Berkshire Record Office. A free index to the Faringdon records covering the period from 1547 to 1853 can be downloaded from the BRO website at www.berkshirerecordoffice.org.uk/family-history/wills-probate. Details of the locations of Berkshire wills held at other repositories can be found on the probate page on Genuki Berkshire at www.berksfhs.org.uk/genuki/BRK/#Probate.

The Berkshire Probate Index CD is an essential purchase for anyone who has ancestry from Berkshire, and will serve as a gateway to some of the most important records for family history research which can help to put the flesh on the bones of your ancestors. All proceeds from the sale of the CD go to the partners who sponsored this important project.