Welford is a village and parish in south-west Berkshire, in the valley of the river Lambourn, six miles north-west of Newbury on the road to Lambourn.  The parish stretches more than five miles from north to south, bounded at its southern tip by the London to Penzance railway line. Bisected by the rivers Lambourn and Kennet, and the Kennet and Avon Canal, the parish is also crossed by the M4, the A4 and the B4000 (the Roman road known as Ermin Street).

The parish consists of six separate settlements: Welford (the largest, and which has the church), Wickham (separated from Welford village by the M4, and which has a chapel, the school, the village hall and one of the pubs), Easton, Weston, Hoe Benham and Halfway.

From the late 1890s the village was served by the Lambourn Valley Railway. Welford had its own station until 1960, when the line closed to passengers and regular freight, although a spur to RAF Welford continued to be used until 1973.

(Other Welfords in the UK include a village in Northamptonshire.)

Welford lies within the deanery of Newbury and the archdeaconry of Berkshire, which transferred from Salisbury diocese to that of Oxford in 1836.

The parish church of St Gregory, pictured below, is one of only two round-tower churches in Berkshire. 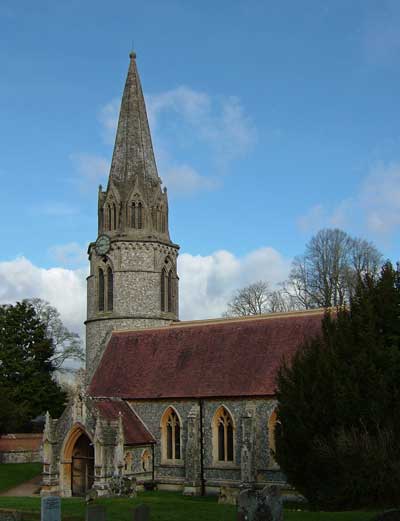 There is also a chapel of ease, St Swithin’s*, at the top of Wickham hill, originally built onto a Saxon watch tower in the twelfth century. The chapel is famous not only for this but also for its elephants: eight papier mache models, three of which were brought from the Paris Exhibition of 1862 by the rector Rev William Nicholson. The further five were made to order in this country. Between 1845 and 1858 both churches were demolished and rebuilt by the rector Nicholson. Both the octagonal steeple of St Gregory and the Saxon tower at Wickham escaped demolition, although the latter acquired an additional 30 feet of Victorian flint work to its top.

According to the Victoria County History there were Congregational and Primitive Methodist chapels at Weston at the turn of the twentieth century.

A village school was built in 1857 on land in Wickham granted by Charles Eyre of Welford House, and paid for by him and the rector Rev William Nicholson. Built for 190 pupils, it had an average attendance of 120 children in the late nineteenth century. It is now Welford and Wickham C of E Primary School.

The manor house of Welford Park was first built in 1652 on the site of a monastic grange, which disappeared during the Dissolution. The land was later granted to Sir Thomas Parry, treasurer to Elizabeth I. Parry’s main residence was at Hamstead Marshall. After his death in 1560, Welford was occupied by his widow, who is buried in the adjoining church of St Gregory. Thereafter Welford Park passed down through his descendants, inter alia the Jones and Archer families. Thomas Archer rebuilt the house in 1702. Later occupants, still connected to the Parry line, were the Houblon and Puxley families, the latter whose private residence it still is.

The rectory house at Wickham built during the reign of Henry II is now known as Wickham House.

A brick and tile works at Wickham existed for over a century.

600 acres of the parish were commandeered in September 1943 for the creation of RAF Welford. Although planned as a bomber OTU satellite for Membury, Welford airfield was handed over to the USAAF for D-Day preparations, and is today a vast munitions depot operated jointly by the RAF and USAAF.

Pubs: the Five Bells on the B4000; the Halfway on the A4 beside which there was a tollgate (demolished in the 1960s).

Wickham has a village hall.