West Challow is a small downland village and civil parish three miles west of Wantage, in the Vale of the White Horse. 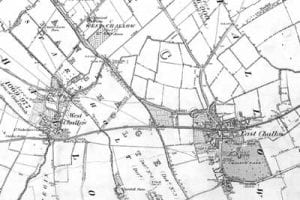 Challow railway station, on the Great Western Railway between Didcot and Swindon, was built on the Wantage-to-Faringdon road, two and a half miles north of West Challow. The station closed in 1964.

The Wilts and Berks Canal, from Trowbridge to Abingdon, which opened in 1810, ran through the village. Traffic had virtually ceased by the end of the nineeenth century. It is currently undergoing restoration.

Vales of  the White Horse, Oxfordshire

The parish church of St Laurence is Norman, the nave dating from around 1190. (It is incorrectly named as St Nicolas on the Ordnance Survey 6-inch map series updated to the 1880s.)

Two pubs, the Prince/Princess of Wales Hotel and the Leather Bottle Inn existed in the mid-nineteenth century.

Joan Vokins, née Bunce, a farmer’s wife from West Challow, became an early Quaker leader. She travelled, preached and published extensively in England, the American colonies and the Caribbean, and was the sister-in-law of the much persecuted Oliver Sansom of Boxford. Manfred Brod has written her entry in the Oxford dictionary of national biography.

The GWR provided employment for five porters, a stationmaster and a railway policeman from the village in 1851. There was also a shop in the village at this time.