Leckhampstead is a village and civil parish on the downs between Wantage and Newbury. It was formerly a chapelry of Chieveley.

West of the main settlement is the smaller settlement of Leckhampstead Thicket. The hamlet of Hill Green which lies to the east of the B4494, was the original Leckhampstead until the time of the Black Death, when the few survivors moved to higher ground on the other side of the valley.

Egypt is an old  place name in Hill Green.

There is also a Leckhampstead in Buckinghamshire.

The parish council website, includes a number of historical pictures.

In the Victoria County History Berkshire Leckhampstead is covered under Chieveley.

B H Bravery Atlee Notes on the history of Chieveley with Winterbourne, Oare and Curridge (also of Leckhampstead) together with provisional lists of those from these parishes who served in the Great War (Newbury, Blacket Turner, 1919) is held in West Berks Library.

Leckhampstead was for centuries a chapelry of Chieveley, served by a curate. Today it is part of the West Downland benefice of Brightwalton with Catmore, Chaddleworth, Fawley, Leckhampstead, Great Shefford with Shefford Woodlands and Welford with Wickham. This benefice lies within the deanery of Newbury and the archdeaconry of Berkshire, which transferred from Salisbury diocese to that of Oxford in 1836.

The church of St James the Less, built 1859, replaced Leckhampstead Chapel. Also known as Leckhampstead Old Church, this was dedicated in about 1050, and stood near Chapel Farm at Hill Green. The chapel was demolished in 1859 when the new church of St James was built, incorporating the Saxon font, the Jacobean pulpit and altar rails, the single church bell (1350) and also the porch timbers from the original chapel.

The war memorial comprises an obelisk on a plinth with two clock faces, one facing north and one facing south. The chains surrounding the monument came from a warship that took part in the Battle of Jutland, and they are supported on spent shell cases. The clock on the memorial has hands made from First World War bayonets, hours made of .303 cartridges and minutes made from .303 bullets.

A Wesleyan chapel here, built in 1860, and a Primitive Methodist chapel, erected at the Thicket about 1830 (and rebuilt in 1874) were mentioned in the Victoria County History.

In 1850 Winterbourne had two schools, one endowed.

The Stag was in 1851 a beer-house called the Stag and Stocks.

Several large sarsen stones formerly stood in rows at Hill Green, Leckhampstead, and were thought to be the remains of an alignment or avenue. They were removed in the late nineteenth century, though many are lying close by.

The Hangman’s Stone marks the southern village boundary, and was so called from a local tale in which a sheep rustler was carrying a stolen sheep over his shoulder with a rope held around his neck. The thief fell asleep sitting on a stone beside the road and the sheep, in struggling to get free, hanged the man by the rope around his neck.

The eighteenth-century Malt Cottage at Hill Green is Grade II-listed. In the 1851 census it appears malting was still carried out. 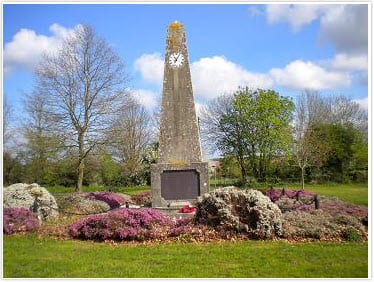 Situated on the village green, at the junction of Shop Lane and Nuttingtons in Leckhampstead, the memorial commemorates those who died in both World Wars.

This unusual memorial is surrounded by naval chains and 4 inch shell cases.  The hands of the clock were made from WW1 bayonets, the hours are .303 cartridges and the minutes are .303 bullets.