Childrey is now in Oxfordshire, but until 1974 it was in Berkshire. It lies about 2.5 miles west of Wantage, in the Vale of the White Horse and at the foot of the Berkshire Downs.

Challow railway station, on the GWR, which opened about two miles away in 1840, served the village until it closed in 1964. The Wilts and Berks Canal also ran through the village, and the Childrey stretch is now undergoing restoration.

The village website carries a number of old photographs.

Childrey: a village in the Vale of White Horse, was written by June Maxwell Drummond in 1989 and updated in 2003 by a group of villagers.

Childrey is a rectory in the diocese of Oxford. It is now part of the Ridgeway benefice.

St Mary’s Church is eleventh-century, grade-I-listed, and noted for its curious leaden font. It has a Fettiplace family chapel with numerous memorial brasses.

A school was built by William Fettiplace in 1526. A girls’ school was built in 1840 according to the village website, and the 1851 census listed schoolmistress Sarah Rose from Bolton, but the National Gazetteer of 1868 mentions only a boys’ school.

A Sunday schoolmistress was also mentioned in the 1851 census.

A Methodist school opened in 1859.

The Hatchet Inn is listed in the 1851 census, when the publican was William Merrey.

Rampaynes is the principal manor house of Childrey, and was the home of the Fettiplace family until the seventeenth century. It was owned by the Burton family at the turn of the twentieth century. A second manor-house, attached to Frethornes Manor, was still in existence in 1771, but had disappeared by 1824. The site was said to have been in a field north of the church.

Childrey was enclosed in 1772.

Almshouses were built by William Fettiplace in 1526, by Queens College, Oxford (rebuilt 1867) and by the Coventry Trust in 1912.

Childrey formerly had a number of charities, most of which have now been combined into one.

The village hall was provided for the village in 1896 by Major Dunn, first as a working men’s club and reading room. The village post office closed in 2008.

A stone cross in the High Street, near the village pond, commemorates both World War 1 and World War 2. 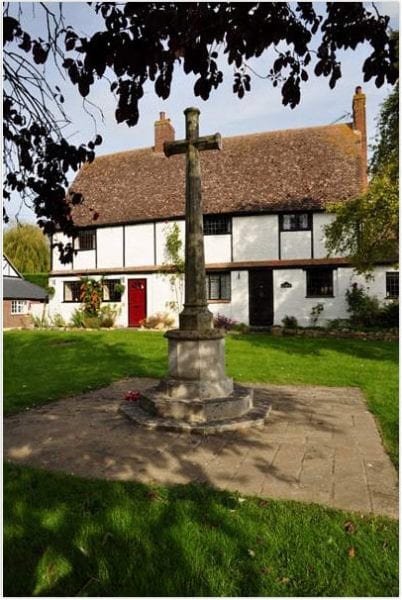