There is a Bronze Age burial mound at Bill Hill, situated near Rectory Lane.   The earliest settlement in the Bracknell area was an Iron Age hill fort referred to locally as Caesar’s Camp, near the eastern end of Nine Mile Ride.

The name Bracknell is first mentioned in an AD 942 Winkfield Boundary charter as Braccan heal, and may mean "Land belonging to a man called Bracca" or “Hidden place covered in bracken”; one of the current schools is named Brakenhale, an early version of this.

This area was covered by Windsor Forest and William 1st created a hunting reserve, which was used by Royalty from the 11th to 18th centuries. Passages referred to as rides were cut through the forest and a number of roads are still called Rides.

The small village of Bracknell Street is recorded from the 17th Century. In the early 19thcentury Bracknell was a small village straggling along a single road until the railway arrived in 1856 and Bracknell started to grow. A cattle and poultry market developed and Thomas Lawrence and Sons brickworks supplied high quality bricks for a wide range of Victorian buildings including Westminster Cathedral and the Albert Hall.

The present town of Bracknell was designated as a new town in 1949 and was substantially created in the 1950s and 1960sto house some of the population displaced from London in World War II. The initial plan was for 4 neighbourhoods, each with shops, community centre, library, doctors, dentist, church, public house and as much green space as possible.

Priestwood was constructed on Priestwood Common and was the first to be occupied in 1951.

Easthampstead was an old village close to Bill Hill and the manor house in Easthampstead Park. Birch Hill is a southern neighbourhood which was originally part of the civil parish of Easthampstead.

Bullbrook,( the brook now runs in a culvert), was built in the 1950s and Harmans Water, named after a shallow lake, now a park and football pitch followed, being completed in the late 1960s.

After the originally planned New Town development further building took place; Crown Wood, named after the Crown Estate in Swinley Wood was started in the late 1970s, followed by Forest Park in the 1980s.

Bracknell became a borough in 1988 and one of the six Berkshire Unitary Authorities, renamed as Bracknell Forest, in 1998.

The town centre is a pedestrian area currently (2014-15 &?) undergoing a major redevelopment with almost half the centre flattened. Three old public houses survive in the centre; The Old Manor, a 17th century manor house, the Bull and the Red Lion, the Hind’s Head reputedly the haunt of highway men, which stood next to the Old Manor was demolished and the site is now occupied by Bracknell & Wokingham College. The Met Office occupied the site opposite the college until it moved to Exeter in 2003. The area to the north of here is Wick Hill named after Wick Hill House, which was owned by the explorer St. George Littledale, now converted into flats.

Bracknell is in the Oxford Diocese under the Archdeacon of Berkshire. This area was mostly in the hundreds of Cookham and Ripplesmere and later the Easthampstead Poor Law Union and were set in part of Windsor forest, parts of which still form the southern and eastern borders. Bracknell Forest covers areas previously in the parishes of Easthampstead, Warfield, Binfield and Winkfield.

There are also a number of churchyard cemeteries.

Easthampstead Park, a Victorian Mansion, is a now a conference centre in a large park www.eastpark.co.uk/

South Hill Park, next to Birch Hill, was another great house, now an arts centre with the adjacent Wilde Theatre. The Oscar Wilde connection seems tenuous but he did create the character Lady Bracknell in his play “The Importance of Being Earnest” The associated park behind the house encloses South Lake there is also a large grass area with North Lake in front of the house on the other side of Ringmead, www.bracknell-forest.gov.uk/southhillpark

Lily Hill House built in about 1817 with large mainly wooded grounds, became business offices to several companies including Racal and Ferranti, www.lilyhillhouse.com, the grounds are now a public park www.bracknell-forest.gov.uk/lily-hill-park-leaflet

Broadmoor Hospital, Crowthorne, RG45 7EG, is one of three high-security psychiatric hospitals in England and is currently, 2015 undergoing a major redevelopment, http://www.wlmht.nhs.uk/bm/broadmoor-hospital

Winchester House in the town centre was occupied by 3M for some years, but when the company left it became an unloved derelict eyesore but is finally being demolished in 2015.

The Meteorological Office in Bracknell at SU 874695 was demolished in 2007, and the site now contains blocks of flats. Before demolition was completed the internal war memorial, which contains names from WW1 and WW2, was photographed. 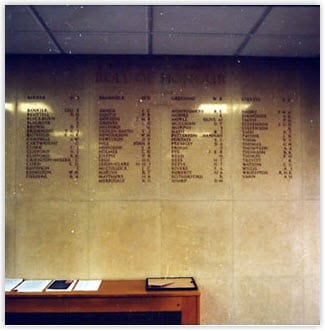 The photos were provided to the Berkshire Family History Society for the purpose of publication but we have been unable to identify and thus contact the photographer. If any copyright issue is identified please contact the society using the Help > Contact menu option

Bracknell’s War Memorial is situated at the main entrance to Princess Square in the town centre’s pedestrian precinct; there is no list of names on this memorial. 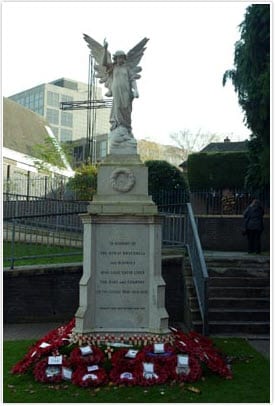