When John Harvey senior and his wife and three small children arrived in East Ilsley in 1916/7, for his wife, Lillian, it was a homecoming.

When the parents of Lillian Harvey (neé Walker) moved to Gloucestershire they left their eldest daughter to be brought up by her grandparents, George and Mary Ann Tuson, who kept the White Hart public house on the High Street in East Ilsley. Lillian later moved to London where she eventually met John Harvey. They had one son, George, before they married in 1906, and later had five more children in London, two of whom had died in infancy, before moving to East Ilsley. Therefore, when they arrived, they had with them Walter (5), John Charles (3), and a baby, Alfred. Sadly, Alfred died aged 22 months in November 1917 and is buried in East Ilsley churchyard. In February 1919 Lillian had another son, Frederick. At his baptism his father’s occupation was recorded as ‘soldier.’

The family lived at various locations around East Ilsley, including Compton Road and Broad Street. From their cottage in Broad Street, Lillian would have been able to see the White Hart, a hundred yards away, where she spent her teenage years, and where her initials, and those of her grandparents were carved into the brickwork in the front gable in 1889.

Walter (Walt), John Charles (Charlie), and Frederick (Freddy), all attended school in East Ilsley. Walter left school in 1926 and John Charles in 1928, when he enlisted in the Army aged 14.

In order to support her family, Lillian worked for the Post Office, delivering letters to surrounding villages. When they had to move out of their home in Broad Street, she took her youngest son to live, for a while, in Beedon, but still walked to work each day in East Ilsley.

John Charles was the second youngest surviving child of John and Lillian Harvey and was always known to his family as Charles or Charlie. Having left school at 14 in 1928, he trained as a musician, passing examinations at the Royal Military College of Music before joining the Regimental Band of the Royal Berkshire Regiment, in which he played the French Horn, and accompanied the regiment on its various deployments overseas.

It is reasonable to suppose that Charles corresponded regularly with his mother and brothers during his time overseas, but we have just five surviving letters to his elder brother Walter (Walt) from which to work out where he was at any one time. The story of his army service can be sketched from these letters but is largely conjecture.

The first letter suggests that Charles had been in Germany and was on leave, prior to leaving for India the following February. The letter is undated, but it is fair to assume that it was written in the last months of 1931, (or possibly 1930) as he mentions Christmas is coming and that his leave ends on January 1st. The address on the letter is Hawkridge Farm, Bucklebury, where his mother and younger brother were staying at the time, ‘until they find a better place.’

The next letter dated November 22nd 1932 from 1st Royal Berks Regt. Victoria Bks. Dinapore, (sic) India, mentions his height of 5ft. 3½ins. He teases his brother that he will be able to look down at him the next time he is home.

In a letter dated May 26th 1934, from South Barracks, Khartoum, Sudan, he records the temperature at 120˚ in the shade.

‘I suppose I shall be home some time before I finish my time which is 1940 but still think I shall purchase my discharge soon after I get home’.

He says he is fed up with nothing to see but sand for weeks on end. In the same letter he says, ‘Only 6 months to do here’. He seems to suggest that he will be leaving within six months and sailing for England. It is not known whether he returned to Sudan after a period of leave or whether he did not return to England until much later. His final undated letter, from HQ 1st Royal Berkshires, British Expeditionary Force, suggests that he has been home on leave recently and seems to think he will be home again soon, when he hopes to visit his brother in person.

‘I hope if I do get time I’ll be over to see you. Of course, anything may happen between now and then, but still we are hoping for the best…………

Well, I suppose its Au Revoir and don’t let the war get you down. There’s plenty worse off than you out here. Au Revoir.

From your Brother Charles

The Royal Berkshire Regiment had been in France since September 1939, and by May 1940 had taken up positions along the river Dyle. On May 13th they made their first contact with the German forces and for two days held their ground. Later they were given the order to withdraw and make their retreat to Dunkirk. 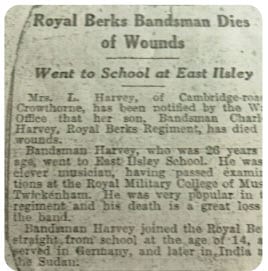 Among those retreating soldiers was bandsman, John Charles Harvey. On May 16th whilst carrying a wounded soldier on a stretcher, he was killed by a hand-grenade. A witness reported to his family some years later that there was no time to do a proper burial, but they dug a shallow grave in a hedgerow and placed him there in France on the way to Dunkirk. His body was never recovered.

A search has found that his name does not appear on any local war memorials, though he is recorded on the Dunkirk Memorial which stands at the entrance to the Commonwealth War Graves section of Dunkirk Town cemetery. It commemorates more than 4,500 casualties of the British Expeditionary Force who died in the campaign of 1939-40.

Pictures supplied by the Harvey Family.