Winkfield is a large and ancient ecclesiastical and civil parish in East Berkshire, in part bordering West Surrey.

Originally eight miles across, Winkfield remains one of Berkshire’s (and the UK’s) largest parishes.  It still contains some widely scattered hamlets, including Brock Hill, Chavey Down, Maiden’s Green, North Street, The Plain, Winkfield Row and Winkfield Street to the north-west of the church. It formerly embraced large sections of the present-day parishes of Ascot Heath, Bracknell, and Cranbourne.

From the 11th century until the Dissolution the manor of Winkfield belonged to the abbey of Abingdon and there are recorded instances of the Winkfield tenants refusing to render their customary dues to the abbey. Over the next 300 years there was a succession of landholders, including George III who retained it as his private estate.

While the northern part of the parish retains its rural character, the southern part is very heavily developed as new house building has intensified in East Berkshire.

The church, dedicated to St. Mary, dates from the 13th century with numerous subsequent additions.

A messuage known as the Old Court House or King’s tenement, is now the ‘White Hart’ public-house.

There are many 16th century and earlier houses in Winkfield including Kilbees Farm, Foliejohn Cottage, Abbey Farm House, the Old Forge and the Pump Room on Winkfield Plain, built over a mineral spring and a former place for ‘taking the waters’.

Links and other useful sources

Details of Winkfield men who fell in the First World War and Second World War can be found on http://www.roll-of-honour.com/Berkshire/Winkfield.html 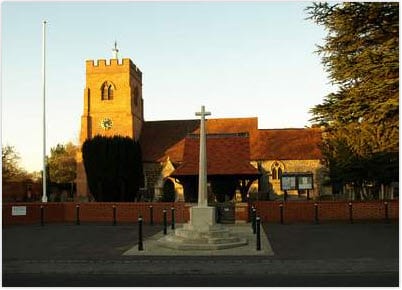 Winkfield War Memorial, with the Church of St Mary in the background, commemorates those who died in both World Wars.