Wallingford is a Market town beside the Thames, on the edge of the Chilterns and Berkshire Downs with easy access to major roads and the railway and has a remarkable ancient history stretching back to the bronze age.

Settled before Anglo-Saxon times it became an important Burh during King Alfred’s time. He constructed fortified towns to defend his country against the invading Vikings and Wallingford was as important as his capital Winchester. Enclosed on three sides by earthen walls capped with a wooden palisade, and the river on the fourth Wallingford thrived. There are traces of the earth walls still to be seen around the Kine Croft in the centre of the town.  The original street layout is also still there, and 1066 when William crossed the Thames here on his way to London he appreciated the importance of this Saxon town. In 1067 he ordered the construction of Wallingford castle under his knight Robert D’Oiley who had married Ealdgitha daughter of Wigod the Lord of Wallingford.

The castle became very impressive and a power base for the monarch. During the reign of Queen Matilda and her cousin Stephen, Wallingford was her stronghold and the treaty of 1153 which concluded the war was drawn up here. In 1155 Henry II held a Great Council at which he acknowledged the support given to his mother Matilda and granted Wallingford a Charter of Liberties. This allowed Wallingford to have its own Guilds and Burgesses and hold regular markets which it still does today.

Wallingford had 11 parishes in the 13th century but the advent of the Black Death reduced the population by a third. There is more information about St Mary le More, St Leonard (the oldest) and St Peter the three churches that remain standing, although St Peter’s in now redundant and put to other uses.

During the centuries Wallingford Castle has had many Royal visitors and in its heyday was as big as Windsor Castle is today. By the time of the Tudors in the 16th century, the castle was falling into a state of decay and Henry used parts of the Castle to build his own at Windsor, transporting materials down the river on barges.  During the Civil war, Charles made Oxford his stronghold and Wallingford became part of the surrounding defences, the town being dragged into the conflict. After several skirmishes Wallingford was the only place still holding out until July 25th when terms of surrender were agreed. Two days later Colonel Blagge marched his men out of the castle with full honours. They were allowed to march for 10 miles before disbanding, in recognition of their bravery.

Wallingford Townhall partially raised up on stone pillars in front of St Mary le More is a timber-framed building constructed in 1670, just 4 years after the Great Fire of London. It has a balcony overlooking the market square and it is from there that important news was proclaimed to the townsfolk. The mace used by the Town Council dates from 1650 and is said to be a model for the mace used in Parliament.

Wallingford became an ordinary market town with its own brewing, malting and iron founding industries which now no longer exist supporting the surrounding village communities. The Railway came to Wallingford in 1866 as a branch line from Cholsey and was used to transport cattle and goods as well as passengers to Reading and beyond. In 1966 “The Bunk” as it became known was closed and the railway is now run by the Cholsey and Wallingford Preservation Society who run passenger trains at certain times throughout the year.

Also in the market place is the Roman Catholic Church, which started life in 1799 as a congregational Methodist Chapel. 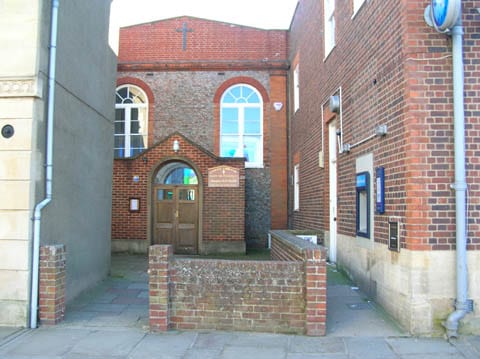 One of the places  to visit in Wallingford is the museum with its displays of the history and more information can be found at www.wallingfordmuseum.org.uk