In 1798 France held an exhibition including ceramics and engineering and over 7,000 people attended.  Exhibitions were held again in 1835 and 1848.

Henry Cole (designer of the first birthday card) and Digby Wyatt (from the Slade School of Art) approached Prince Albert, patron of the Royal Society of Arts, and suggested a visit to France to see the exhibition with the idea of staging one in the UK.  This led to a Royal Commission with a committee of fifty to organise it and to be called “The Great Exhibition of the Works of Industry of All Nations” or “The Great Exhibition”.

It was originally planned to choose from 250 designers but Paxton, head gardener to the Duke of Devonshire, came up with a design for the exhibition.

The location was the subject of much discussion and although the Queen initially said “No” it was built in Hyde Park.

It took five months to build, stayed open for five months and was re-erected in 1854 at Sydenham Hill in south London.  It was destroyed by fire in November 1936.

With photography in its infancy, there are only paintings of the exhibition and exhibits.

It was opened on 1st May 1851 by Queen Victoria.  Colonel Charles Sibthorp was a great critic of the Exhibition.  Paxton overcame his demand not to cut down the trees on site by putting a barrel-vaulted roof over the trees which when taken down left the trees unharmed. 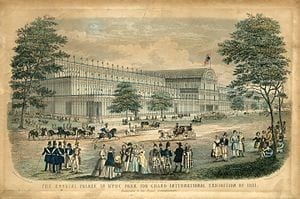 The exhibits such as the statue of St George and the Dragon cast in concrete, showed new materials like rubber and concrete but the items had been seen before just made in different materials.  There was little real innovation.

It was difficult to decide what some of the exhibits were for.  Amongst them was an ornate set of very heavy grape tongs.  To prove the point John had a guess at one which included a very ornate object of a palm tree, two people and a candle which was a candlestick.  There was also a drinking cup made of soapstone, with a heavy base of ebony and a handle that looked like a spout.

Nothing was for sale in the exhibition but you could place orders with the companies.

Examples from the exhibition can be seen in National Trust properties, Victoria and Albert Museum and Coalbrookdale in Shropshire.

Digby and Cole designed a memorial to Prince Albert, who died in 1862, the Albert Memorial with him holding the exhibition catalogue in his hand.

A profit of £186,000 was made and used to purchase land on which was built the Science, Natural History and Victoria and Albert Museums, as well as the Imperial College of Science, the Royal Colleges of Art, Music and Organists and the Albert Hall.

With a population of 16 million in the UK only 6 million attended the exhibition.

What happened to the rest?  A reporter wrote about conditions in Manchester with 2 or 3 families in 1 room living on the banks of a foul river.  The life expectancy for a man was 21 years.  With train tickets, accommodation, tickets for entry, food and drink on a salary of £1 per week they could never afford to go to the exhibition.

John posed the point of the exhibition.  Was it to show off and where do the poor fit in? Should not more have been done to help the poor in society? 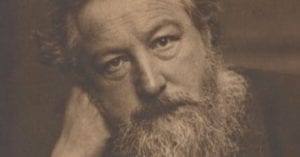 William Morris, though only nine at the time, hated the exhibition with all the mass produced items.  He gave the lead to the Arts and Crafts Movement intent on the revival of craft skills such as functional handmade furniture which was available to all.

Examples of the movement are a stained glass window depicting the Virgin and Child by Edward Burne-Jones and Angels by William Morris in St Michael Church, Tilehurst, wallpaper and book covers by William Morris and plasterwork by Ernest Gimson.

The Cotswolds became an important centre for the Movement in the early 20th century. Craftsmen and women followed in William Morris’ footsteps, whose home was at Kelmscott Manor, and loved the house as a work of true craftsmanship.  He considered it so natural in its setting that it looked to him as if it had “grown up out of the soil”.

Rodmarton Manor near Cirencester, Gloucestershire, was built and furnished by Ernest Barnsley and it looks Jacobean but was built in 1920.

The Owlpen Manor was repaired by Norman Jewson in 1926.  All the items were built by hand without the use of machines.

At Munstead Wood near Godalming in Surrey, the garden was created by designer Gertrude Jekyll, who believed in treating gardens as rooms such as rose garden and geranium garden.