For local and family history research purposes, Berkshire is best considered as the historic Royal County of Berkshire — that is, the county essentially as it existed for more than 1,000 years before boundary changes were made in 1974.

Further administrative changes followed in 1998 that abolished Berkshire County Council and replaced it with six unitary authorities. These recent boundary changes can sometimes confuse a new researcher into looking for records outside the county when those resources are, in practice, best found within it.

Berkshire’s origins can be traced back to the mid-seventh century. For the next 200 years, the area was fought over repeatedly until the Saxon kings of Wessex finally secured all of the land to the south of the River Thames.

After the Norman Conquest, William the Conqueror began construction around 1070 of a castle at Windsor. Today, Windsor Castle is the world’s oldest and largest inhabited castle, and has been home to British monarchs for almost 1,000 years. It is an official residence of Her Majesty The Queen, and the Royal Standard flies from the castle’s Round Tower whenever she is in residence.

From the end of the ninth century until 1974 Berkshire remained a boot-shaped county extending to the western edges of the city of Oxford, and separated from it by the River Thames. This image of the ‘Berkshire boot’ is a useful reminder of the extent of the historic county – post 1974 it resembles more of a shoe, as you can see in the before and after slider below. 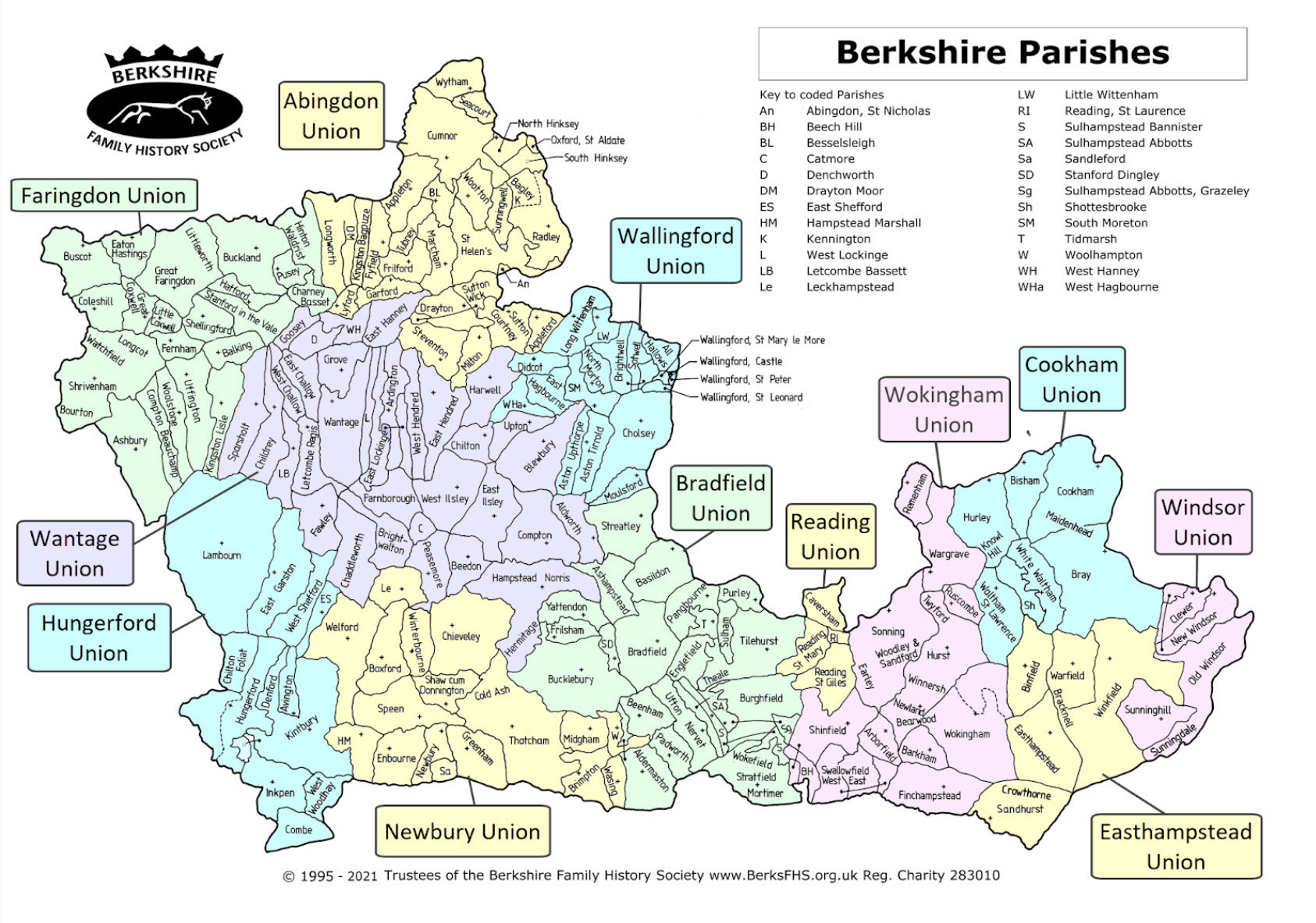 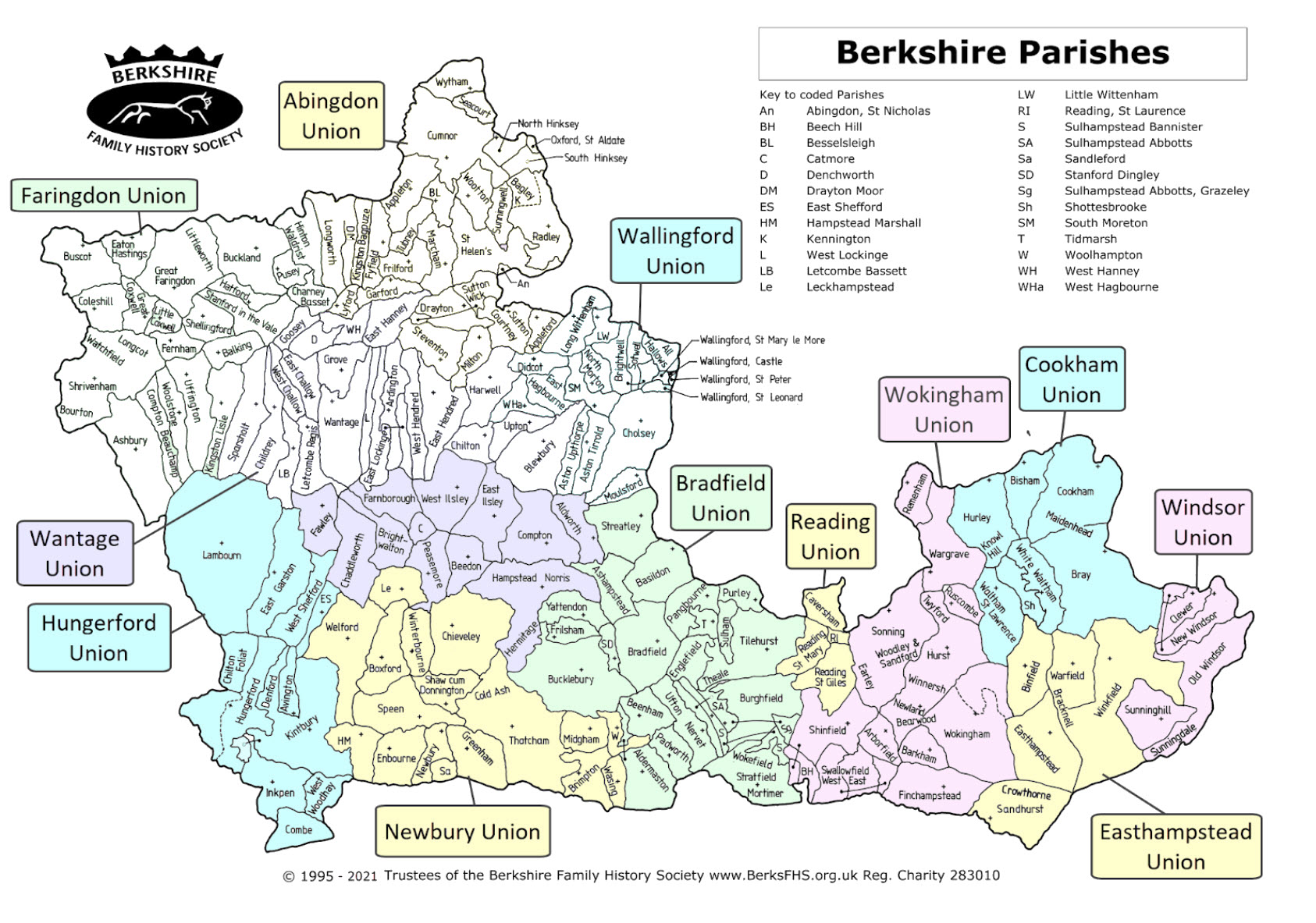 The Thames defined the northern county border for over 100 miles, separating Berkshire from Oxfordshire and, further east, from Buckinghamshire. To the south-east, the heathland border with Surrey was less obviously determined, but to the south, the Rivers Enborne and Blackwater marked the boundary with Hampshire. To the west lay Wiltshire, separated from Berkshire by the River Cole in the northern part and by a stretch of the River Kennet near to Hungerford. A finger of Gloucestershire touched the north-west corner.

The county contained 141 ecclesiastical parishes in 1831, rising to 202 by 1901. The increase reflected demographic changes rather than territorial expansion.

In 1834 the New Poor Law assigned these parishes into 12 Poor Law Unions, generally based on population centres (but of widely varying size) replacing the Hundreds of medieval times. In January 1835, the Abingdon Poor Law Union became the first such Union to be formed in the UK. (see slider map above)

Berkshire County Council came into being in 1889, and Reading finally supplanted Abingdon as the official county town. In 1894 a tier of rural and urban district councils was created below the county council, together with 185 civil parishes, most of which formed parish councils.

Between 1889 and 1912 a series of minor adjustments were made to the county’s boundaries; in the west Hungerford became part of Berkshire, taking in part of Chilton Foliat and thus rationalising two former splits; in the south-west Shalbourne was transferred to Wiltshire, and Combe re-allocated from Hampshire into Berkshire; in the north-west Lechlade was lost to Gloucestershire; and Reading secured a small piece of Oxfordshire in the form of Caversham.

The Boundaries Commission removed the ‘leg’ from the Berkshire boot in 1974 and with it annexed the Berkshire Downs, Wantage, Didcot, Faringdon, Wallingford, Abingdon and the Vale of the White Horse (which provided the county’s emblem), allocating them into Oxfordshire. Smaller adjustments were made elsewhere on the border, including the switch of Slough from Buckinghamshire into Berkshire.

In 1991 a general tidying-up of parish boundaries took place, altering some long-standing lines the original Saxon logic of which was indiscernible to 20th century bureaucracy. This led to re-allocation of some individual houses and small hamlets to different civil parishes.

The Archdeaconry of Berkshire

The earliest reference to an archdeaconry in Berkshire dates from the 1130s and within some 20 years, the Berkshire archdeaconry was well established and essentially mirrored the extent of the county. Archidiaconal boundaries did not change in 1974 and church records for the parishes of North Berkshire and the Vale of the White Horse are regarded as Berkshire records. Original documents are held in the Berkshire Record Office in Reading.

For over 600 years, the Berkshire archdeaconry was divided into four rural deaneries – Abingdon, Newbury, Wallingford and Reading.

Three principal Peculiars 0f Berkshire — those of the Prebendary of Faringdon, the Dean of Salisbury, and the Dean and Canons of Windsor — fell outside the archdeacon’s jurisdiction.

Until 1836, the Berkshire archdeaconry answered to Salisbury diocese, within the archdiocese of Canterbury, at which point it was transferred to the Oxford diocese. In consequence, researchers will find that church records, wills, administrations and other pre-1858 probate documents are located in the county record offices of Berkshire and Wiltshire — and even Oxfordshire for later records — and at The National Archives, dependent upon the date and ecclesiastical origin of the record in question.

Recently the Oxford Diocese has divided itself into four smaller "episcopal areas" — Oxford, Dorchester, Buckingham and Reading. Today, each is overseen by its own Area Bishop, assisted by an Archdeacon. There has been some subsequent realignment of modern deaneries as a consequence.

When searching for your Berkshire ancestors it is worth considering how the county’s population has changed over time. Two hundred years ago, Berkshire held one of the smallest of the English county populations. The 1801 census recorded 111,000 people in Berkshire, most of them in the western and north western parts of the county. By 1901, Berkshire’s population had reached 259,000 people — a substantial increase but still lagging behind the growth in population for England and Wales as a whole. In the 2001 census, more than 800,000 people lived in the equivalent area, most of them now at its eastern end, and by 2016, the equivalent population had exceeded 900,000 people.

Occupational changes must be taken into account too. Agriculture provided almost 40 per cent of Berkshire’s jobs in 1801 and in 1851 still made up over 20 per cent of them. By 1931, this figure had fallen below 7 per cent and in 2001 below 1 per cent of the total. Railways opened up the county in the early Victorian age, and a range of new industries — from brick and biscuit manufacture to the railway infrastructure itself — brought thousands of new jobs into Berkshire. New workers and their families needed homes and the face and character of many of Berkshire’s towns and villages, particularly in the east of the county, were much altered by the houses and associated buildings that were built to meet that need.

This pattern has continued into the early decades of the 21st century. Berkshire’s proximity to London, and to Heathrow Airport, and with good, if routinely crowded and congested, rail and road connections, has seen the county burdened with very extensive residential development, especially at its eastern end. The homes already built, and the tens of thousands more that are planned to follow them, are now placing acute pressures on a largely unimproved supporting infrastructure that was designed to serve an altogether smaller and less populous county.

For an excellent overview of Berkshire’s rich history, consult An Historical Atlas of Berkshire, Second Edition, 2012, published by Berkshire Record Society. Its 174 pages contain 78 short essays on aspects of Berkshire’s history and the publication is extensively illustrated with four-colour maps and photographs.  It’s available from the Berkshire FHS shop here