Greenham is now a civil and ecclesiastical parish on the south-eastern border of Newbury. Despite the village’s ancient allegiance to Thatcham, of which it was a tithing, Newbury has twice taken bites from the parish to swell its own conurbation. (On the first occasion, in 1878, a group of regulars at the Adam and Eve pub in Stroud Green elected their own mock mayor and council in protest.)

Today the civil parish of Greenham extends from the Kennet to the Enborne, and from the back of the Andover Road eastwards to a dotted line which meanders through Bowdown Woods, across the common to the A339.

Faircross (although Thatcham, to which Greenham was historically attached, was Reading Hundred)

Norman Foster Here was my heart [a memoir of Greenham Common] (Merlin Books, 1988)

H H Hook The church of St Mary the Virgin, Greenham: a short account of its history (1966)

R E I Newton Some history of Greenham Church (1957)

The women’s peace camp protest of the 1980s (against USAF cruise missiles) gave rise to a wealth of published and unpublished memoir and commentary. A specialised collection is held by the library of the London School of Economics.

Greenham lies within the deanery of Newbury and the archdeaconry of Berkshire, which transferred from Salisbury diocese to that of Oxford in 1836.

A church at Greenham is mentioned in the Domesday Book but no land was attached to it. Since the early fourteenth century, Greenham was a chapelry of Thatcham, from which it was separated out as a parish in 1857. The church parish of Greenham is rather smaller than the civil parish, and does not include Sandleford, although it takes in the former Nightingales housing estate, which in 1987 was officially reclassified as part of Newbury.

The church of St Mary the Virgin is a small building of flint and stone, built in 1876 in thirteenth-century style on the site of an Early English church. It replaced an earlier chapel.

There were both Baptist and Primitive Methodist chapels in Greenham in the nineteenth century. Both disappeared when the military airbase was developed on the common in the mid-twentieth century.

A fee-paying Greenham school was founded by Baptist minister James Bicheno in the eighteenth century, taken over by James Legge in 1812.

A “charity school built upon the common” is recorded in 1854.

Berkshire Record Office holds records of a National school at Greenham in 1846, the predecessor of the building at the junction of Pyle Hill and Bury’s Bank Road. This school building, which dates from about 1870, ceased to be a school in 1959, and stood derelict before being sold in 1976 for conversion to a private house. There was a second National school at the eastern end of the common, in Crookham.

A short-lived school was built in 1986 for the children of American servicemen and women stationed at USAF Greenham. It closed when the USAF left the airbase and is now Thornford Park, a secure hospital unit for offenders.

Crookham Court School, in a former 1850 manor house, was a private prep school for boys until an abuse scandal brought about its closure in 1990. The building (formerly Crookham manor house) became derelict while its owner was in prison, but has now been convereted into apartments.

Everyone has heard of the Newbury Coat, but few remember that it was actually made in Greenham. At five am one June morning in 1811, following a wager between Sir John Throckmorton and John Coxeter, proprietor of Greenham Mill, two sheep were shorn, the fleece washed, stubbed, roved, spun and woven. The cloth was then scoured, fulled, tented, raised, sheared, dyed and dressed ready to sew. Thirteen hours and 10 minutes after the operation began Sir John sat down to a grand supper in his new coat, to the delight of 5,000 spectators who also feasted at Greenham Mill that night. Only the unfortunate sheep had little to celebrate; they were roasted for the assembled company.

The event was commemorated in a painting, below: 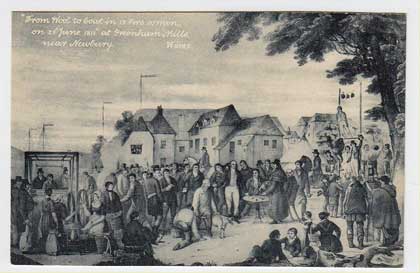 Greenham Mill, which was mentioned in Domesday, also produced blankets, later switched to corn production, and then to electricity generation in 1906. As Newbury Power Station (but still in Greenham) it generated electricity for the town until the mid-1960s.

Two of the most famous sporting amenities located in Greenham are named for Newbury: the racecourse and the golf course. Newbury and Crookham Golf Club began as two separate clubs which united after WWII. The original, at Crookham, was the first inland golf course in Britain. 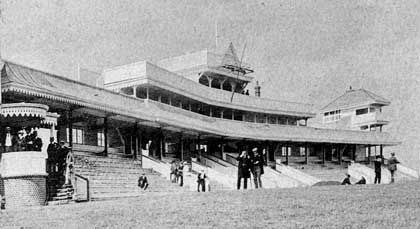 Newbury Racecourse opened at Greenham in 1905 (the grandstand is pictured above, just before opening), also on land from the vast Baxendale estate.

Lloyd Baxendale died in 1937, from a chill caught watching the coronation procession of George VI. The sale of his estate brought Greenham Common into council ownership.

Greenham Common, consisting of some 800 acres of peaty heathland at around 400 feet above sea level, has often attracted the military over the centuries. In 1745 it was used as a marshalling base for troops assembling to march north and quell the Jacobite rebellion in Scotland. The last quarter of the nineteenth century saw some massive manoeuvres, one of the largest in the summer of 1875, when 15,000 cavalry arrived on the common. Thousands flocked out from the town to see them, and there were parades, balls, sports and festivities. The cavalrymen had their orders, however, to ensure that they did not abuse their welcome: inhabitants were to be treated with the utmost civility, horses were not to nibble hayricks and there was to be no galloping past livestock. 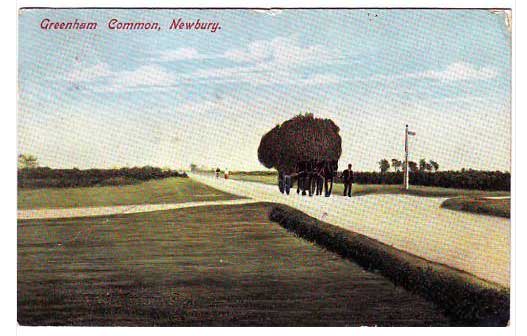 The common was a natural airfield, and nobody questioned the government’s action in requisitioning it for a base in 1940, first for the RAF but soon for the USAAF. It was at Greenham that the D-Day glider troop landings were planned, and the troops assembled here heard Eisenhower’s famous speech beginning “The eyes of the world are upon you…”

With peace in 1945 it was assumed that Greenham Common would be restored but, after six years of prevarication, the USAF installed a heavy bomber base. The people of Greenham endured the constant drone of aircraft manoeuvres, and their protests were largely ignored, but there was some grim satisfaction when it was discovered that the B-47s had damaged the runway to the point where flying had to stop for reinforcement work.

Hopes of restitution were raised again in 1960s, only to be dashed in the late 1970s when the government proposed to station in-flight re-fuelling tankers at Greenham. This time a deafening roar of protest was raised from the entire town, to the apparent astonishment of the government. The tankers went instead to RAF Fairford, ostensibly because it had just been noticed that the atomic weapons establishment at Aldermaston lay uncomfortably close to the Greenham flight path. Thereafter various proposals were mooted for the Greenham airbase, which had the longest military runway in Europe. Some even suggested it might be London’s third airport.

The eyes of the world were upon Greenham once again in the 1980s when, as a cruise missile base for the USAF, the very name of Greenham became a byword for controversy. The Greenham Peace Women attracted opprobrium locally but became a universal symbol of anti-nuclear protest. There was some hard-hitting and successful PR, such as the 1983 rally in which many thousands of women “embraced the base”, and some clever sloganising such as “Visit Greenham Common before bits of Greenham Common visit you”. For the first time, Greenham had a higher profile than Newbury.

Following glasnost and the departure of the missiles, the base was handed back to local public ownership. Greenham Trust was created to develop and manage on the built-up area of the former base as a business park, with all profits going to local charities. The airfield itself has been restored to common land, owned by West Berkshire Council and managed for wildlife and public recreation, albeit with some grim Cold War reminders, including the former missile shelters.