Bucklebury is a village and parish about six miles north-east of Newbury. The original settlement was on the river Pang, to the south of which lies Bucklebury Common. In recent years Upper Bucklebury has become the parish’s larger residential area.

Below is the area mapped by John Rocque in 1761. 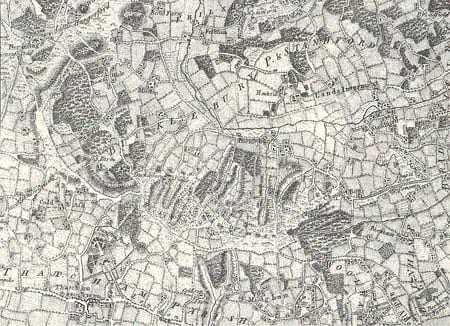 Parish registers transcripts are available on microfiche in Newbury Library.

Bucklebury lies within the deanery of Newbury and the archdeaconry of Berkshire, which transferred from Salisbury diocese to that of Oxford in 1836.

The parish church of St Mary the Virgin is early Norman in origin, and the living is a vicarage.

A chapel of ease was built at Marston in the twelfth century, but almost none of its original features survived a restoration of 1855. It still served as chapel of ease in 1920.

A new Church of England church, All Saints, has been built in Upper Bucklebury.

A chapel of St Mary Magdalen was known to have stood at one time at the top of Chapel Row Hill.

A Congregational chapel was set up in the parish in 1830, and still functioned in 1920. Known as Morton’s Chapel, some of its registers are held in the Berkshire Record Office.

Bucklebury Church of England Primary School in Upper Bucklebury was a former National school, which may in turn have been the successor of a charity school set up in 1811 by the curate and/or lord of the manor, Winchcombe Henry Howard Hartley, for six boys and six girls, clothed and educated at his expense. Endownment perpetuated the school after his death.

Four other day schools existed in Bucklebury in 1819, as well as a Dissenters’ Sunday school.

An endowment by Lady Frances Winchcombe in the early eighteenth century paid for a number of boys to attend Thatcham school.

The (Old) Boot, the Three Crowns, the Bladebone and the Hartley Arms appeared in the 1851 census, and were still extant in 1911. The Blade Bone was so called because its copper sign supposedly encases the bladebone of a mammoth found locally in the seventeenth century.

The monks of Reading Abbey, who originally owned the manor of Bucklebury, created three fishponds, which still exist. Following the dissolution of the monasteries the manor was sold to John Winchcombe (son of Jack o’ Newbury) who built Bucklebury House about 1550; this was damaged by fire in 1830-33 and later it was almost completely demolished.

In the early eighteenth century Frances Winchcombe, lady of the manor of Bucklebury, married Henry St John, later Lord Bolingbroke. He treated her badly, and in 1715 fled to France to escape impeachment for Jacobitism. She died, broken-hearted, three years later, but he returned to Bucklebury in 1723.

The manor and 5,000-acre estate later passed to the Hartley family, descendants of a female Winchcombe line. In the 1830s Winchcombe Hartley tried to enclose Bucklebury Common, but was successfully opposed by village people, led by the Dissenting minister. The common now comprises 826 acres (334 hectares) of heather and woodland, open to all, although it is still owned by the Hartley family, one of whom in the 1990s famously established his right to charge householders for access across his land to their own homes.

Bucklebury still has a grand avenue of two rows of oaks, the first of which are said to have been planted when Elizabeth I visited the Winchcombes in the 1560s, although it is likely that these originals were replaced by Bolingbroke when he returned in 1723. More were planted to celebrate the victories of later wars, and commemorative replanting has continued into the late twentieth century.

The chief houses in the parish were Bucklebury House/Place (above, now redeveloped), Hawkridge House and Marlston(e) House, which was bequeathed by Sarah Ouchterlony to Benjamin Bunbury in 1813. The Bunburys sold it in about 1896 to George Palmer of Reading, who rebuilt the house. It is now a private school.

In the early nineteenth century Chapel Row was famous for the Chapel Row Revels, a midsummer orgy of drunkenness, petty crime and violent sports. Chief amongst these was backswording, whereby contestants would have one hand tied behind the back, and with a cudgel in the other would attempt to bludgeon the opponent senseless. Much blood was shed, to the delight of the crowd, but after the death of a Bradfield man the authorities moved in to end backswording. An ad for the Revels of 1831 in The Reading Mercuryforbade fighting, and promised the somewhat tame substitutes of cricket and cakes. No doubt on some quiet corner of the common the backswording continued in defiance of the ban. There was also an old pony racecourse on the common, where races were held in the nineteenth century.

Local industry centred on wood trades such as hurdle making and bowl turning. A traditional iron foundry with a waterwheel on the river Pang operated in Bucklebury for over 300 years, owned by the same family until 1904. It closed in the 1950s.