The civil and ecclesiastical parish of Denchworth lies in northern (old) Berkshire, about 2.5 miles north-west of Wantage. Since 1974 it has belonged to Oxfordshire. The Land Brook and the Childrey Book flow through the parish, which is also crossed by the  GWR railway line although there is no station. The parish contains the former manor of Circourt.

The living is a vicarage in the diocese of Oxford. The church of St James is medieval in origin, but was subject to Victorian renovation. The church has stained glass by Edward Burne-Jones.

"Before the restoration of the parish church in 1852 there was a room over the porch containing a parochial library for the use of the vicars of Denchworth. It was begun in 1693 by the vicar and Gregory Geering. The books, which included a 1483 edition of the Golden Legend and other rare volumes, were secured in their places by chains. The library is now at the vicarage, and the Golden Legend is the property of the Bodleian Library." (VCH, 1924)

This collection, reputed also to include 100 volumes and a mermaid’s rib, has since been dispersed.

According to directories of1868 and 1870 Denchworth had a Wesleyan Methodist chapel.

In 1729 Richard Gilgrasse willed £50 for teaching poor children of Denchworth. A Parliamentary enquiry of 1819 found this endowment to be generating income which employed a schoolmistress to teach 12 boys and girls to read, and the girls to knit. The 1881 census enumerated a school and schoolmistress.

The Fox Inn claims seventeenth-century origins. The 1851 census lists a pub called the Carpenter’s Arms, which appears to have been home to several households. The 1881 census enumerated the Star Inn and the Fox Inn.

Denchworth is famous for rich pasturelands, and in the eighteenth century was famous for its cheese.

Denchworth, amongst several of its neighbouring parishes, was a stronghold of the Fettiplace family. The Hydes were Denchworth’s second most famous family.

The elaborate timber-framed WWI Muster Roll memorial in Denchworth is on the external wall of the Fox Public house which lies in Hyde road, that is in the cul-de-sac opposite the parish church at grid reference SU371917.

The Roll of Service is on the left side and the Roll of Honour on the right side. 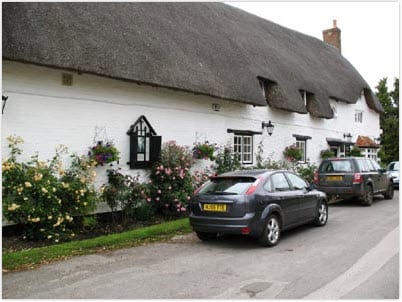