Compton is a village, civil and ecclesiastical parish in the river Pang valley in north Berkshire, about 6.5 miles south of Didcot.

The Didcot-to-Southampton railway, built in 1881, passed through Compton, which had a station and a freight yard. Passenger services stopped and the station closed in 1962, followed by closure of the freight yard and services in 1966. The nearest railway station now is at Goring.

Compton in Berkshire is not connected with Compton Beauchamp, formerly in Berkshire but now in Oxfordshire, other than that they are not far apart.

There is also a Compton in Surrey.

Compton falls within the archdeaconry of Berkshire, in the diocese of Oxford since 1836 (and before that, in Salisbury). The parish church of St Mary and St Nicholas has been dated from its font as thirteenth century, remodelled in 1850 and 1905. It has a square tower.

William Allen in 1774 willed an annuity of £5 for the maintenance of children at school. By 1819 a village school existed, supported by subscriptions and by the vicar. A schoolmistress was enumerated in 1851. The BRO has records of the National school from 1854.

Today there are two schools:

Both are state schools run by the local education authority.

In 1644 Compton Heath was the scene of the encampment of the whole Parliamentary army.

Roden House (alias Stokes Manor) dates back to 1664. During the reign of George III it was the scene of the close of a notable run of the Royal Staghounds, when the deer, after a chase of 30 miles from Windsor, took refuge in the hall. The king gave the deer its liberty, and called him Compton.

The 1851 census records an iron and brass-founding business employing 23 men.

The Institute for Animal Health at Compton is one of three laboratories run by the national centre for research into the health of farm animals.

The cross in the churchyard of St Mary and St Nicholas in Compton commemorates those who died in both World Wars. 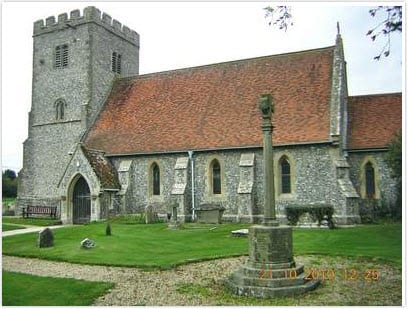