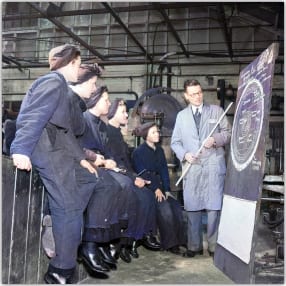 Enjoy all five online talks in the Second World War Series for the price of four, by booking this series ticket.

The Talks Series comprises of:

Based upon his book Reading at War, Stuart will explore how the war affected Reading and its citizens. From the victims of war, both military and civilian, the privations and shortages; examples of heroism and self-sacrifice; to in contrast, the black market and war-related crime. Hear about the relationship between the townspeople and the 25,000 or so evacuees visited on them in September 1939. And see how wartime advertising expounded ‘make do and mend’, to combat the lack of things to buy.

Formed in 1940, the Home Guard was one of  a number of voluntary and part-time formations raised for local defence. Despite the bumbling image created by the BBC classic “Dad’s Army”, the force emerged as a well-trained, well equipped and highly motivated part of Britain’s defences. Find out about Reading’s Home Guard in this fascinating talk.

In 1940, Britain stood alone following the fall of France. With the German army poised across the channel, only the RAF could prevent the Luftwaffe from gaining the air supremacy needed to successfully mount the expected invasion. Historian Richard Marks, will look at how the RAF’s systems and equipment allowed them to retain air supremacy over southern England and prevent the invasion.

Discover how the talents of women were integrated into the British war effort on the Home Front, in industry and in the Armed Services at every level during World War Two. Bill is a popular speaker and his talks are meticulously researched.

The Second World War mobilised British society in a way no other had, and this was reflected in the changing composition of the Army. The Army also adapted to different conditions, environments and technology.  Discover how the Army was structured, recruited and supported and how this changed during the War. What “being in the Army” meant could vary enormously from being a pay clerk in Manchester, to a tank crewman in Rangoon. A must for anyone with ancestors who fought in the war.

You will need to pre-book, because full joining instructions will be emailed in advance. Bookings close one day before the first talk.

To book scroll down.

The event is finished.