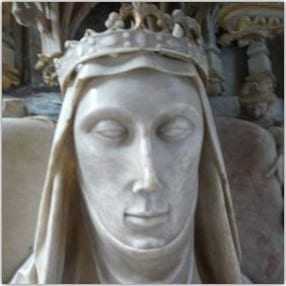 Alice through the Wardrobe

An enduring myth about Donnington Castle claims that it was once home to the poet of The Canterbury Tales, Geoffrey Chaucer. Not so, but it was once the home of his grand-daughter Alice Chaucer, a redoubtable woman who first married at the age of 11, and later became the Duchess of Suffolk and a Lady of the Most Noble Order of the Garter, an honour granted rarely to women. Widowed after her third marriage, she became (in the words of Wikipedia) “a rare and important example of an autonomous woman patronising art works depicting empowered historical female characters.”

Places are limited, and pre-booking is required; joining instructions will be emailed in advance. Bookings close one day beforehand.

To enjoy this talk you will need a computer (or laptop/tablet) which has speakers and a microphone and, ideally, also a webcam. You also need to be able to access your emails from this device. First-time users will be asked to download a small piece of software, which will be sent in advance. For further technical help ask

free to members; visitors are invited to contribute £3