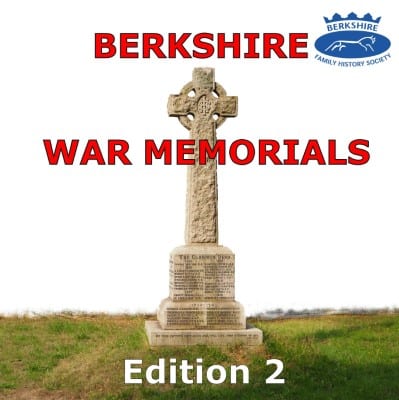 This updated CD holds transcriptions of some 900 war memorials found across 'old' Berkshire and covering not only the First and Second World Wars but also the Boer War, Korea, Northern Ireland, the Falklands and Afghanistan.There are 150 memorials that are new to this CD, all of which have accompanying photographs. The price of the Second Edition CD is £20 (with a discount available to current society members.)

Many Anglican Church memorials and village and town monuments were first transcribed in the 1990s, although some of these now carry added names following recent conflicts. There are inevitably further war memorials — in non-conformist churches, post offices, police stations, hospitals, schools and places of work — to be identified, transcribed and photographed.

If you purchased the Berkshire War Memorials CD Edition 1, update your copy now — at a heavily discounted price

You can view a sample of the data below

The data is in Adobe Reader format. Get the reader free from Adobe.com.

For the best experience, we recommend that Windows 8.x / 10 users use Adobe Reader instead of their operating system's native reader.