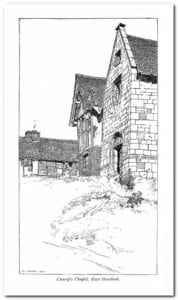 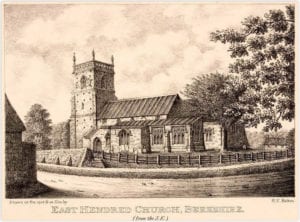 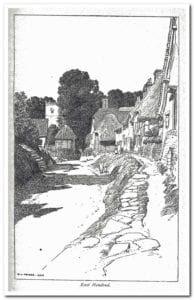 East Hendred is a downland village and civil parish about four miles east of Wantage. Like all of the Vale of the White Horse in which it lies, the parish was part of Berkshire until the local government boundary changes of 1974 moved it into Oxfordshire.

The Hendred brook flows through the village, and the Icknield Way and the Ridgeway pass through.

The parish adjoins its sister village West Hendred, and they were also formerly known as Great and Little Hendred respectively.

Donald Gibson A parson in the Vale of the White Horse: George Woodward’s letters from East Hendred 1753 – 1761 (Alan Sutton, 1982) is in Oxford Central, Abingdon, Wallingford and Wantage libraries.

The church of St. Augustine of Canterbury dates from the twelfth century, extensively restored in the nineteenth. It has a rare sixteenth-century faceless clock, which chimes, strikes and plays a hymn very three hours.

The Roman Catholic church of St. Mary was built in 1865. Next door to the church is the Holy Trinity Monastery, which housed a contemplative community of Benedictine nuns until 2012.

The village also had a Primitive Methodist chapel (VCH, 1924).

Three schoolmistresses were enumerated in the 1851 census.

The 1851 census enumerated an innkeeper and a beerhouse keeper, but gave no pub names. The Wheatsheaf  www.thewheatsheaf.org.uk, the Eyston Arms and the Plough are in business today.

Two miles south of the village centre is Scutchamer or Cuckamsley Knob which, according to legend, marks the seventh-century burial mound of King Cwichelm of Wessex. Other sources consider it an Iron Age long barrow. It was the meeting place for the shire moot in medieval times.

Hendred House, the manor house of Arches manor, has been held by the Eyston family for over 600 years. Permission to build its private St Amand’s Chapel was granted by the Pope in 1256. This little Chapel of Jesus of Bethlehem, as it was first known, was built by the Carthusian monks of Sheen when they came to the nearby Kings Manor in the fifteenth century. It became known as Champs Chapel when, in the eighteenth century, it came into the hands of the Champ family, who used it as a pigeon-house, bakehouse and wash-house. Later the building changed hands again, and became derelict for the early years of the twentieth century. Subsequently it was acquired by the Eyston family, who restored and leased it to the parish council as the local museum. 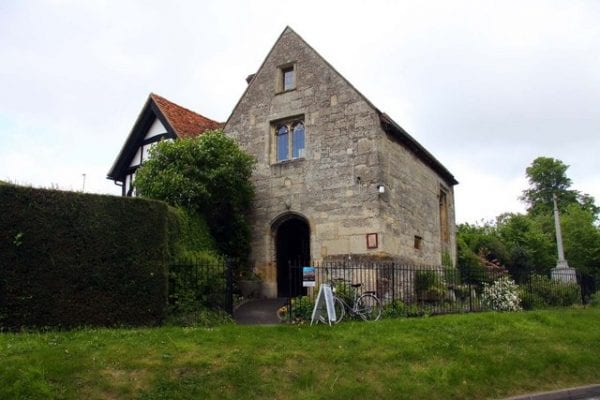 Situated in front of Champs Chapel, now the local museum

, at the junction of High Street and Chapel Square in East Hendred the memorial commemorates those who died in WW1.